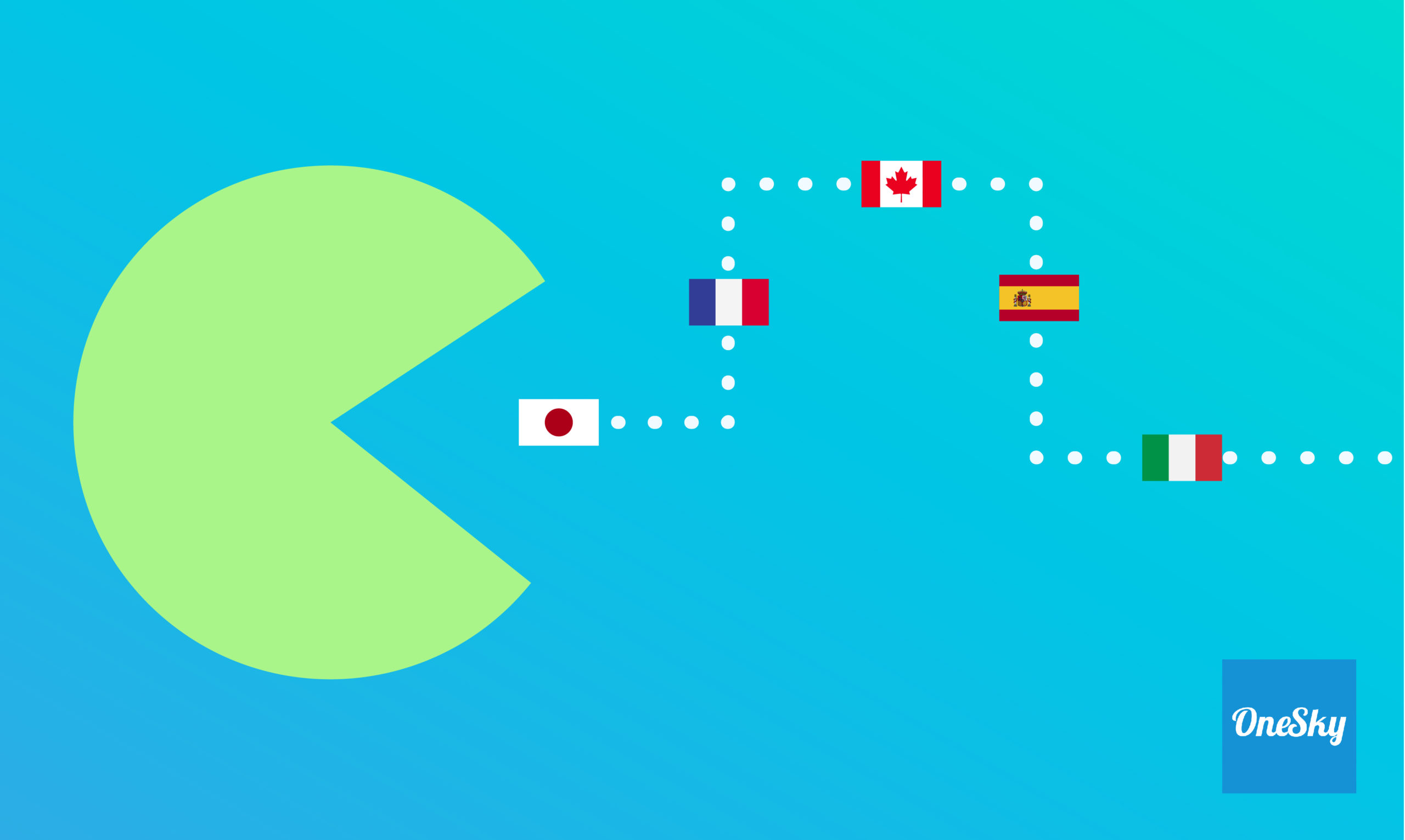 The Best Countries To Expand Your Video Game

Video games have evolved into a universal language that appeals to consumers of any age in any country. We bet you don’t know anyone who hasn’t played a video game!

If you have invested the effort to develop a video game, it only makes sense to expand game reach to gain more users and drive more revenue.

Now is the time to break out of the local market and launch your video game overseas. Read on to find out why it’s worth going global, how to pick the best region for your app launch, and the top 10 countries you should consider.

Did you know that China is the largest video game market in the world, with the industry reporting total revenue of 279 billion yuan (around US$43.6 billion) in 2020? The U.S. ranks second, coming in at $42 billion.

Japan and South Korea rank third and fourth, generating $20.6 billion and $7.3 billion respectively. Meanwhile, global gaming revenue reached $140 billion in 2020 and is poised to surpass $200 billion by 2023. Today, approximately 63% of video gamers are from non-English-speaking countries.

This means if your game is only available in English, you’re missing out on many game expansion and revenue opportunities.

First, you need to decide which markets to launch your app in — and no, don’t just throw darts on a map and then hope for the best.

How To Pick the Best Countries To Expand Game Reach

Here are the factors that can impact how you decide which market to enter and where to invest your resources in acquiring new users:

If you’re launching a sequel to an existing game, tap into your user data, such as average revenue per daily active user (ARPDAU) and customer lifetime value (LTV), to identify markets in which you have already gained traction. These are low-hanging fruits that you don’t want to miss.

No previous data? No problem! You can leverage third-party data to see how much it costs to acquire users in each region. This information can give you insights to ensure that your launch will be profitable.

Collect data on downloads and revenues per category, then calculate the “purchase ratio” to gauge if users in a region are willing to spend money with you. If many users are downloading games in your category, but few are making in-game purchases, the market may not be a profitable one to enter (unless you rely on ad revenues.)

You need enough people in the market to install your game, especially if you’re targeting a smaller niche. To find out what your potential audience size is, use Facebook Ad Manager to gain insights on which regions to focus on outside of traditional markets (e.g., U.S., U.K.)

Use third-party business intelligence tools to benchmark competitors and estimate their downloads or revenues per region. You may realize that instead of going after the usual suspects, you should pursue less obvious markets with a lower CPI. On the other hand, you may avoid smaller markets in which competitors have already gained a stronghold.

Look for markets in which your game will have the potential to rank top 10 in the App Store within your category. The organic uplift can make a significant difference, especially in smaller markets, so you can gain traction before spending money on breaking into larger ones.

If you rely on in-game purchases to generate revenue, you should focus on audiences in countries with high purchasing power. For example, iPhone users are much more likely to make in-app purchases than Android users. If your monetization model is based on ad revenue, you may focus on regions with a large user base (e.g., China, India, Brazil, and Russia.)

Cost and Complexity of Localization

When you enter a new region with users that speak a different language and have different cultural backgrounds, you’ll need to localize your game app. Besides the cost of translation, you may also need to update graphics and hire local marketing and legal experts. How much you spend on localization may vary based on the complexity of the process, which will, in turn, affect your profitability.

While there’s no one-size-fits-all answer, you should consider countries with the highest video game revenue and the most growth potential.

Here are the top 10 countries that account for almost 87% of the global video game revenue:

Another 8% of the spending comes from Russia, Mexico, Brazil, Australia, Taiwan, India, Indonesia, Turkey, Thailand, and the Netherlands. 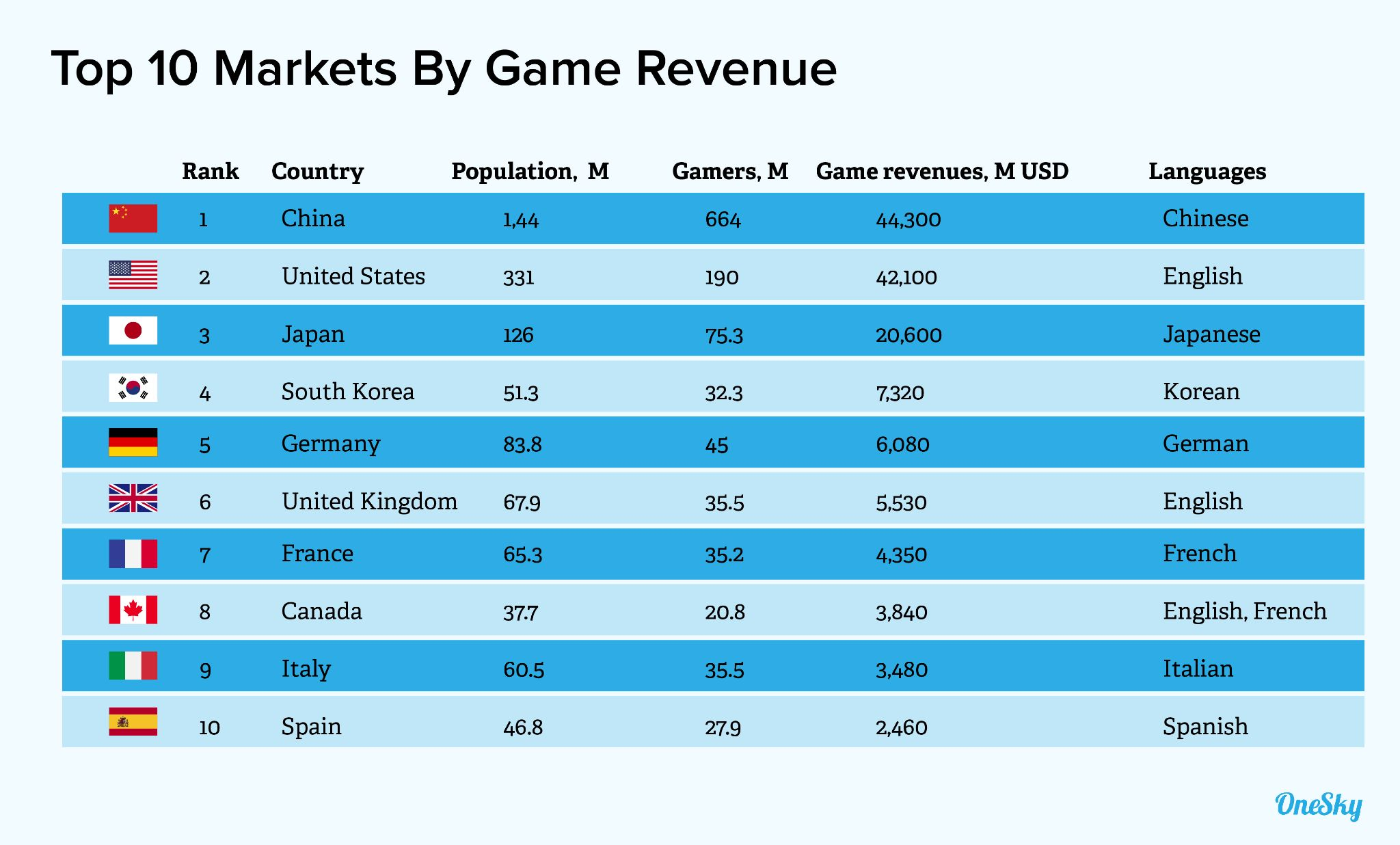 While you may take advantage of being a big fish in a small pond in smaller markets, countries with the highest video game revenue are often the best candidates to expand game reach.

The Asia-Pacific region accounts for 50% of global game revenue, while North America generates about 20%. If you localize your game for just the top 10 countries, you’ll be able to tap into almost 90% of the game revenue worldwide.

But this doesn’t mean you need to translate your game into 20 different languages! If you look closer, you’d see that some of the top 20 countries speak the same language.

A game in English can reach players in the U.S., Canada, U.K., and Australia, as well as parts of India and Asia. Meanwhile, translating your game to Spanish will cover Spain, Mexico, and many Latin American countries.

However, you do need to address the nuances within each locale. For example, people in the U.S., U.K., and Australia all speak English, but they use different terms and expressions. While entering markets with the same language helps increase your efficiency, make sure you don’t skimp on the localization process (e.g., to incorporate cultural references and slang.)

Regions With the Highest Growth Rates

More and more revenue from the mobile gaming sector comes from additional purchases after the initial install. In particular, the Asian gaming market is fast expanding and offers a lot of revenue potential. 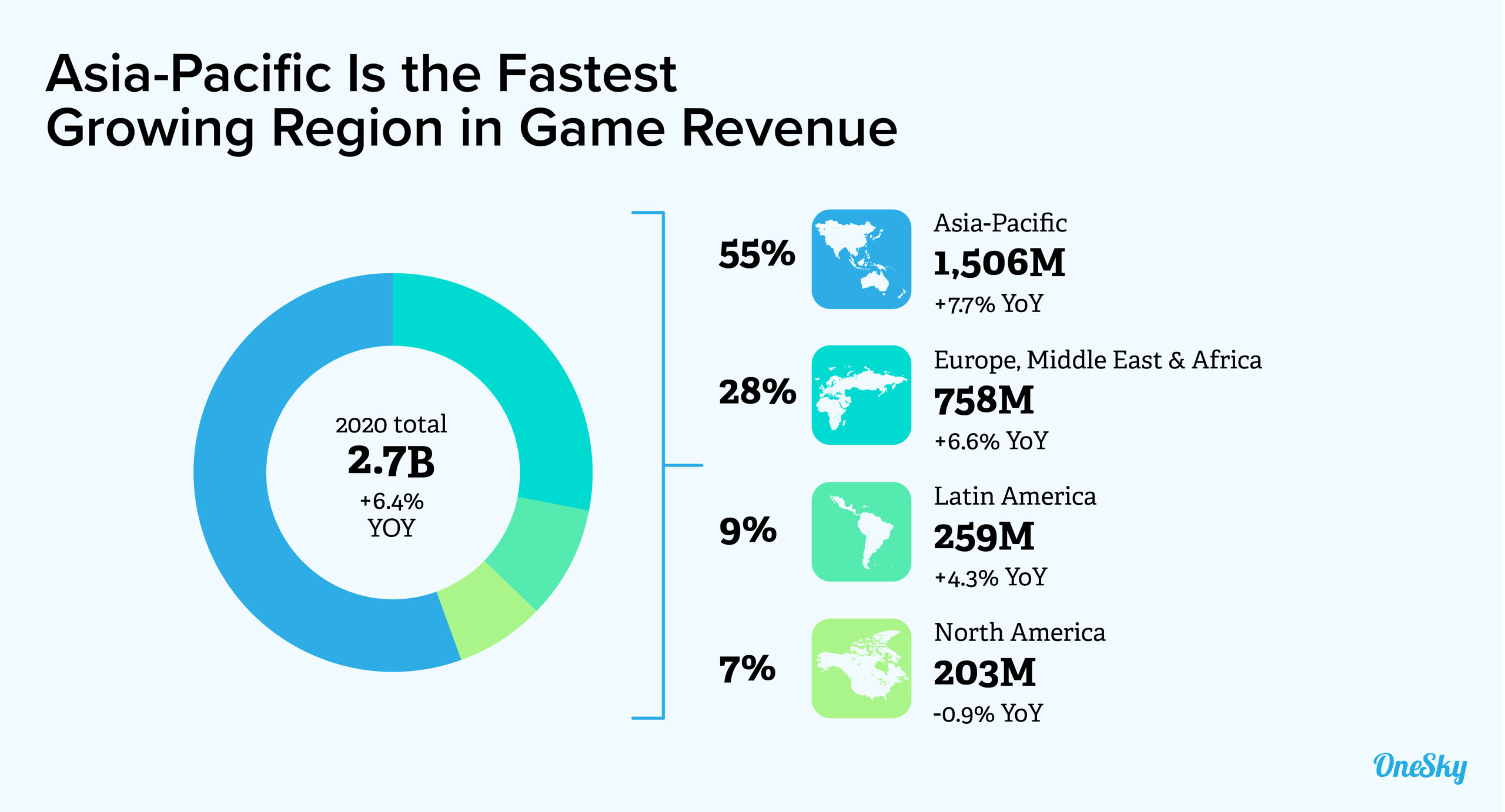 Countries to focus on in the Asia-Pacific region include Japan, China, and South Korea. Also, explore Vietnam, Thailand, the Philippines, Indonesia, Malaysia, and Singapore because their economies are expanding rapidly and the growing middle-class population is having more disposable income.

Don’t overlook the potential of Latin American markets. In particular, Brazil is leading the pack as the largest market by revenue in South America and ranks #12 worldwide.

The country has a 160.1 million online population. Among the 94.7 million video game players (more than most European markets,) 54.9 million have made purchases. The market is forecasted to generate $2.3 billion in revenue, an impressive 5.1% year-over-year growth.

When you enter new markets with a different language and culture, it’s important to localize your game app to ensure that it meets local preferences and speaks your users’ language (literally and figuratively!) Localization can help you increase market penetration, improve user experience, build brand awareness, cultivate loyalty, and drive revenue.

To effectively manage the many moving pieces in a localization project, you can’t leave anything to chance. A robust localization platform, such as OneSky, can help you manage everything from end to end to coordinate resources, streamline the process, and shorten time-to-market cost-efficiently.

Our end-to-end localization solution covers 50+ languages, so you can translate, localize, and test your apps, games, and websites all in one place. See how it works and get started for free today.