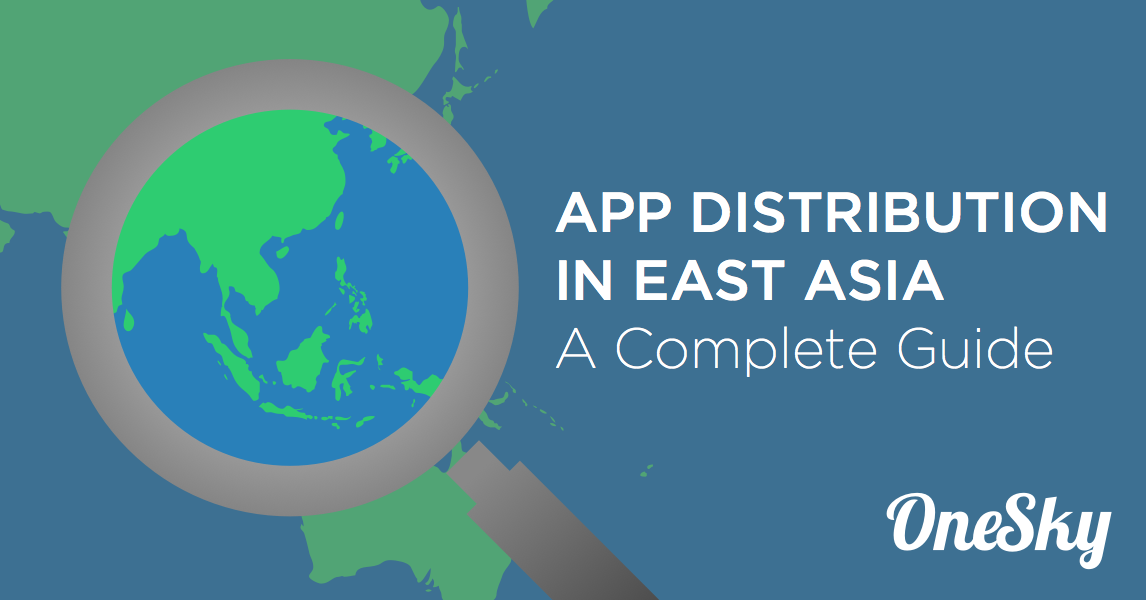 There are as many as 1.5 billion smartphone users in Asia. For developers who are unfamiliar with app localization in Asia, the question is no longer Should I try to gain a foothold in Asia? The question has become How do I properly localize my app to reach those 1.5 BILLION PEOPLE with smartphones?

When it comes to the global app market, the center of gravity has shifted eastward. Japan and South Korea are two of the three biggest app markets in the world. Taken together with the United States, they generate more revenue than the rest of the world’s app markets, combined. And even when download volume there slowed down a bit in late 2014, these markets were able to monetize.

China’s app market isn’t quite as big—yet. It’s leading the BRIC countries in revenue growth. In 2014, it even hit the number three slot, globally, in iOS revenue, behind only the U.S. and Japan. 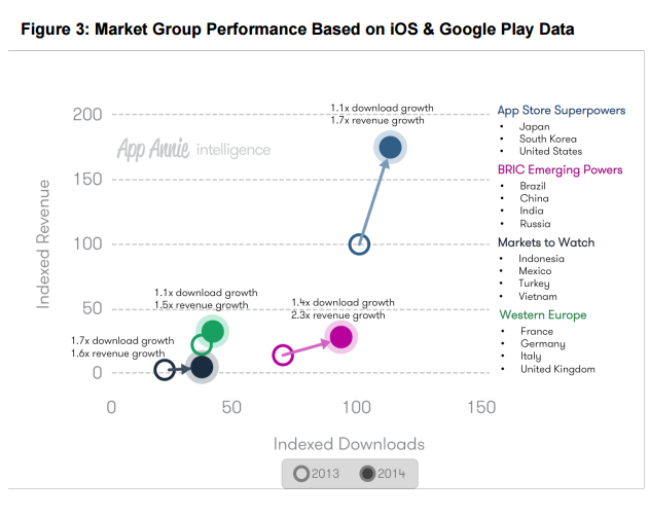 This Asian dominance is only expected to continue. Japan has now surpassed the United States in terms of mobile game spending, with $5.4 billion in annual revenues. The Japanese market is still growing: by 2016, it’s projected to hit $8 billion.

Meanwhile, China overtook the United States in terms of iOS downloads in the first quarter of 2015. Compared to the U.S.’s $5.2 billion revenues, China’s mobile gaming industry earned $4.4 billion last year, but the market is expected to surpass the U.S.’s $7.3 billion in 2016, according to China Daily. 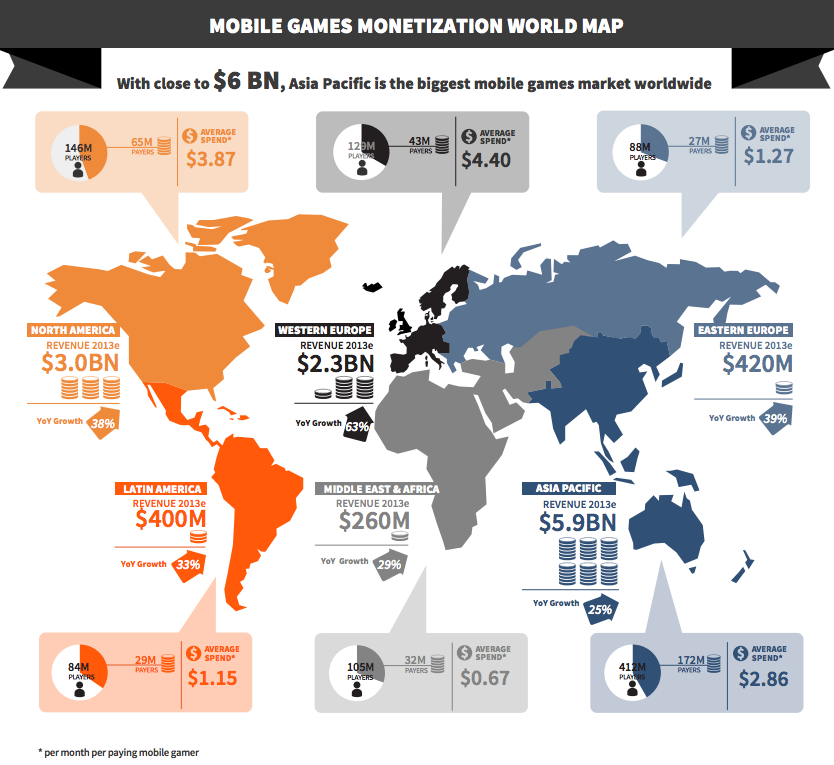 Getting to know Asian distribution channels

Mobile messaging apps are huge in East Asia. More than half of smartphone users there are active on these apps, according to Analysys Mason.

In the United States, Whatsapp and Facebook Messenger dominate the messaging market. In Asia, the market leaders are different. The majority of Chinese users are on WeChat, while LINE is popular in Japan and South Korea. KakaoTalk has a major following in South Korea, too.

These messaging apps have enormous user bases, and they are gaining tremendous traction in the region. As of August 2015, LINE had 211 million active monthly users (MAU), more than half of them in Japan, Taiwan, Thailand, and Indonesia.  WeChat had 549 million MAU, mostly in China. And KakaoTalk boasted 48 MAU, with extended features that include gaming apps, a mobile e-reader, and e-commerce tools.

These apps go way beyond simple messaging functions. They offer games, stickers, and music sharing tools. Altogether, they’re a complete web experience. On WeChat, for example, you can play games, make cash payments, calls taxis, and even buy fresh produce. And LINE hosts some of the most popular mobile games on earth. 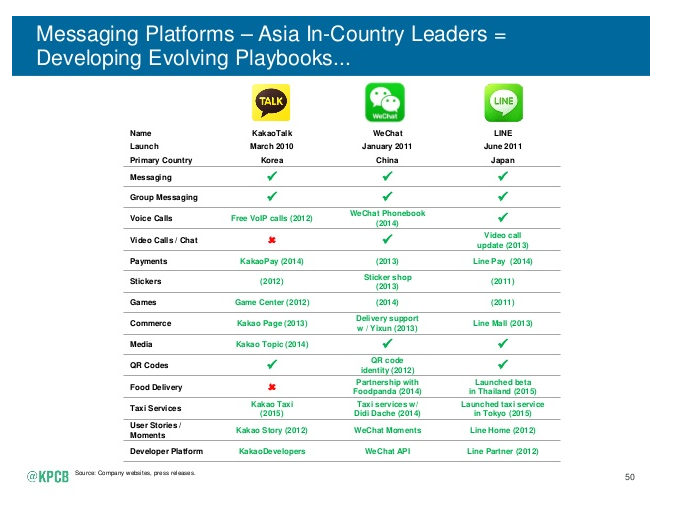 For major apps, partnerships with mobile messengers are essential to success in East Asia. Consider South Korea. Seven of the top 10 grossing apps in Google’s Korean app store are Kakao-branded. When KakaoTalk is on nine of every 10 Korean smartphones, it’s an easy route for a game to rise to prominence.

According to VentureBeat, Kakao has worked with more than 230 development partners, and it has promoted more than 450 games. Every single game that it has promoted has reached the top 10 on Google Play’s most-downloaded chart—an extraordinary record. 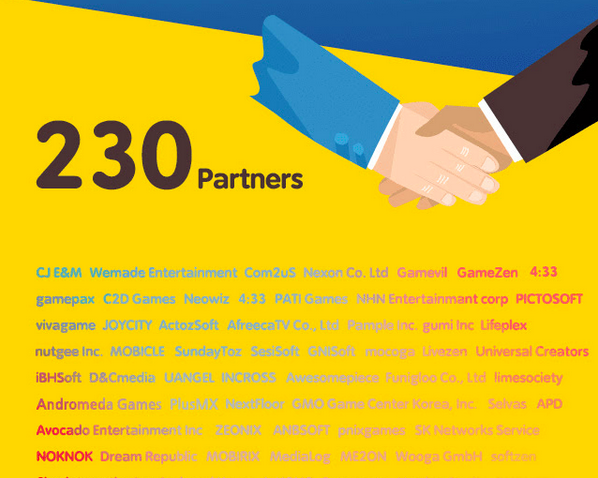 LINE, too, has helped propel games to success. In Japan, the app pushed LINE: Disney Tsum Tsum, which debuted in January 2014. By the end of 2014, it was one of the five most downloaded games in Japanese app stores.

The U.S. app market is pretty straightforward. Two stores dominate: Google Play and the Apple app store. In East Asia, the proliferation and fragmentation of third-party app stores has created a far more complicated app store ecosystem. That’s especially true in China, where 58.7% of mobile internet users have downloaded an app from a third-party mobile store.

In general, third-party app stores can be valuable distribution routes. Data from the One Platform Foundation suggests that developers who submit their apps to multiple alternative app stores will increase expected downloads by 200%, when compared to just making their app available through the Google Play store.

In East Asia especially, local app stores have become extremely important. These third-party stores build their own independent app ecosystems. They have substantial users bases. They have strong user data and can optimize app targeting to their particular customer bases. And in China, where Google has been banned, they fill a major gap in the market.

China has censored Google Play since 2011, forcing developers to publish through third-party Android app stores. Baidu, Qihoo 360, and Tencent are the top three stores in this area, distributing 86% of mobile apps. They’re followed by Wandoujia, and then other, relatively small app distribution channels. 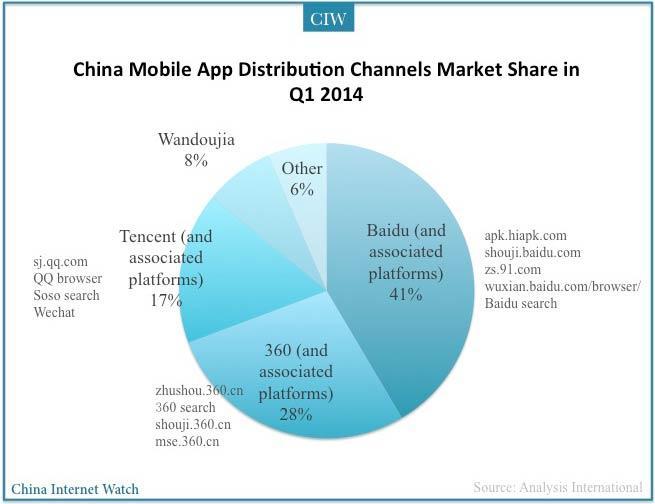 Here’s a quick rundown of the major players in China’s Android market:

Tencent and its associated channels: 17%

Tencent’s app store is sj.qq.com. But Tencent can also bring users to apps through its sQQ browser, Soso search, and WeChat.

Getting to know South Korea

For Western developers trying to access the Korean market, the SK T-store is a great place to start. This store uses the standard revenue model for app stores: developers set their app prices and take a 70% share of the total revenue. The store takes the other 30%. Each developer’s app has to be approved individually. (To get started with the SK T-store, go here). 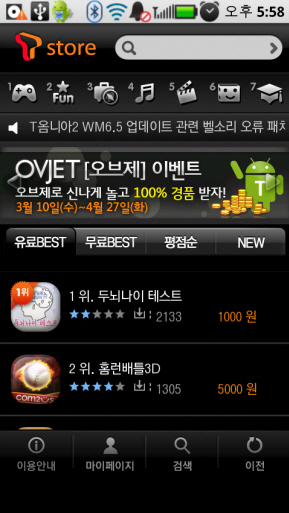 Language and cultural barriers are significant impediments to accessing the Japanese app market. For a foreign developer, getting access to an influential app store can be a huge way to overcome those barriers and succeed in one of the world’s largest app markets.

Mobile carriers in Japan have adopted the iOS and Android platforms. But they also have carrier-operated stores, and they often encourage users to download apps through these platforms.

For example, Docomo is a powerful Android app store that’s preinstalled on every NTT Docomo device in Japan. That’s a huge reach, because Docomo has over 50% market penetration for smartphones in Japan, with 63.11 million mobile phone subscriptions.

Docomo often partners with foreign developers. It offers customized campaign management that’s in Japanese and tailored to the Japanese market.

Top mobile gaming firms and app portals, such as GREE and DeNA, promote and run their stores in much the same way as the Apple store or Google Play.

When heading into Asian app markets, a partnership with a local distribution firm can be enormously helpful.

In China particular, we recommend a co-production model, in which a local distribution partner helps change the look and feel of an app, adapting it for the Chinese market.

Temple Run 2 has also successfully cracked the Chinese market. Through localization, the game, developed by Imangi Studios, has reached 130 million gamers in China, with five to six million daily active users, and about 50 million monthly active users. In one localization touch, iconic martial artist Bruce Lee has replaced Guy Dangerous, the main character of Temple Run 2, in the Chinese version of the game.

Western developers need to be active in seeking partnerships with local carriers and their app stores. More than 75 percent of app revenue in China comes from carrier billing and carrier-branded app stores.

Developers also need to be aware of Android’s relative strength in the Chinese market.  “No matter how successful you are on iOS, if you’re not successful on Android, you’re only capturing a small portion of the market,” said Jeff Lyndon, the founder of iDreamSky. As the advisory firm Digi-Capital found, Android not only dominated download volumes in 2014; it also made more money than iOS.

A good distribution strategy matters. But localization is the single most important step for success in Asian app markets. Simply put, users prefer apps in their native languages. Of the top 25 grossing iPhone apps in China, 92% use Chinese names. For other East Asian countries—Japan, Taiwan, and South Korea—apps that have local names hold between 52% and 76% of the top 25 slots. Similarly, in Japan, 80% of the top 25 grossing Android apps have Japanese names.

East Asia has a unique app ecosystem. But don’t let that daunt you. By staying aware of alternative app stores, taking advantage of messaging apps, and tackling localization, it’s possible to break into East Asia, home of the world’s most promising app markets.