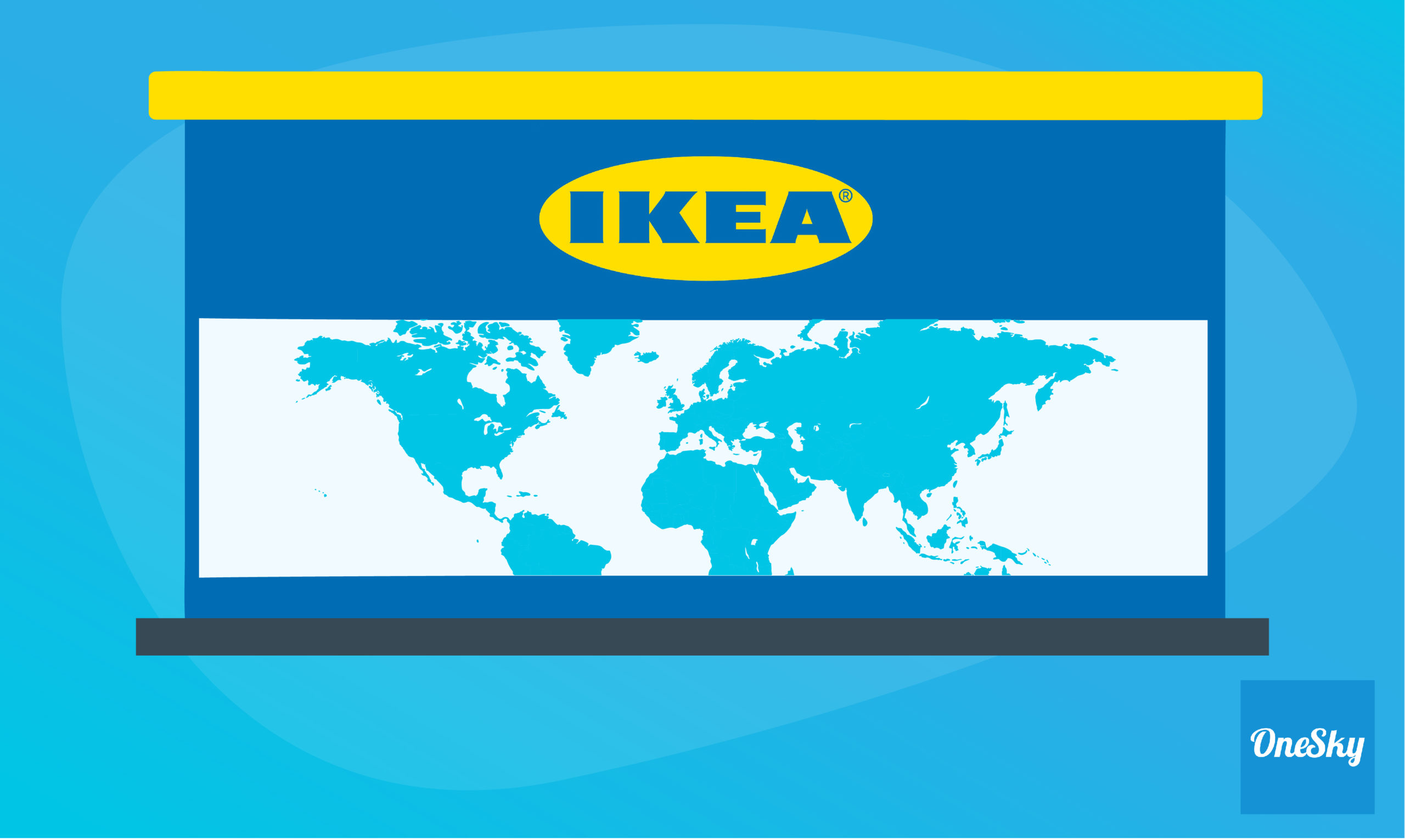 How a Smart Localization Strategy Helped IKEA to Conquer the World

It’s not common for a 17-year-old to set up a successful company. It’s even rarer for the same person to keep growing the business over a lifetime, until it becomes the world’s leading brand.

This is the story of Ingvar Kamprad, the founder of IKEA.

Although IKEA is now synonymous with self-assembled furniture, Kamprad was not an inventor or a designer. In fact, IKEA started as a mail order business.

However, Kamprad was a shrewd operator who understood the potential benefits of entering new markets. Here’s a look at how the localization strategy of IKEA helped to build a $42 billion Goliath — along with the takeaways for your business.

The first IKEA store opened in 1958, in Ingvar Kamprad’s native Sweden. In the 1960s, stores appeared in other Scandinavian countries.

By the 1970s and 1980s, IKEA started to adopt an aggressive international expansion plan. In the space of a few years, stores opened in Japan, Australia, Canada, Hong Kong, the U.S, France, Spain, Italy, and the U.K.

Launching into so many countries so quickly could have been a disaster. But IKEA made it work thanks to a unique mix of two strategies: standardization and localization.

The IKEA Playbook: Standardization and Localization

Some multinational companies find success in new markets through standardization. This is where large corporations try to deliver a consistent experience to customers, no matter where they are in the world. Many designer brands fall into this category.

An alternative model is localization. This is where a business develops unique products and employs optimized marketing for each culture.

Nestlé is a prominent example of a multinational business using localization effectively — we actually put together another case study, which you can read here.

IKEA is somewhere in the middle between standardization and localization.

On the one hand, the company maintains the same branding across continents. Whether you are in Miami or Manila, you will get a similar experience when you walk into an IKEA store.

Everything from the layout to the product range will feel familiar to regular customers. It is a key selling point of the brand.

But IKEA does also consider local trends. The company employs researchers to interview thousands of people, and the information they collect is used to make small adaptations in each market.

For a better understanding of what this mix looks like in practice, let’s take a look at some examples.

The Challenge of China

One of the key selling points of IKEA furniture is that every product comes in kit form. The idea is to assemble the parts yourself, following the supplied visual instructions.

In many areas of the world, people are happy to complete this task in return for a lower price point. But in China, assembling your own furniture is the opposite of a status symbol. Most people prefer to employ someone else to complete home maintenance tasks such as furniture assembly.

This left IKEA with two choices: adapt their model or miss out on one of the world’s biggest markets. Unsurprisingly, the company chose the first option.

The solution IKEA came up with was to partner with Chinese firms that provided furniture assembly services. Customers shopping online could choose their provider at checkout.

IKEA made many more small changes for the Chinese market, as well.

Instead of the huge suburban stores seen in other countries, the company opened stores in more central areas near public transport routes, and mini stores within larger shopping centers.

Aside from furniture, IKEA is famous for food. In some Chinese provinces, the meatballs and ice cream are joined by dim sum and other local favorites.

As a result of these changes, IKEA now generates over $2 billion a year in China from 36 stores and a strong online presence. That accounts for 4.8% of the company’s worldwide sales.

An Introduction to India

Like China, India has a vast population and a growing middle class. However, it is a notoriously difficult market to enter for foreign companies.

For a long time, IKEA held off entering the Indian market. Until 2012, direct foreign investment in retail was restricted by the Indian government. Even after those laws were lifted, it was deemed too risky even to attempt a launch.

That changed in 2018, when IKEA invested about $150 million into opening its first Indian store in the city of Hyderabad.

When that first store opened, staff waved Indian flags as they welcomed customers. In the background, the Gorkha Rifles Band of the Indian Army played a well-known patriotic song. India is a proud nation, so these small touches made quite an impression.

The population of Hyderabad is approximately two-thirds Hindu and one- third Muslim. So in the 1,000-seat restaurant, the usual pork meatballs were replaced with chicken and vegetarian meals.

In the main store, you can find products that have been created especially for the Indian market. For instance, the kitchen section includes appliances for making traditional Indian cuisine.

Pricing is not normally part of localization, but it definitely is in India. Consumers are frugal wherever possible, so it’s important to make the basics very affordable. IKEA in India offers over 1,000 products for Rs. 200 (~$2.69) or less.

It’s still early days for IKEA’s launch in India. But already, the Swedish retailer has embraced the local customs and tastes.

Back in 1974, Japan became the first country outside Europe to host an IKEA store.

It was a bold move at that time, as very few retailers had operated internationally. Localization definitely wasn’t a major consideration.

Unfortunately for IKEA, the lack of cultural understanding caused major problems. In particular, the standardized product range did not fit well with Japanese homes. The furniture was simply far too big.

After 12 years of slumping sales, IKEA decided to withdraw.

Twenty years later, the company made a comeback in the form of a store in Funabashi City, and later, a megastore in Tokyo. The new outlet offered localized versions of the IKEA product range, featuring smaller designs that would fit into even the smallest urban apartment.

Through research, IKEA also discovered that Japanese consumers were happy to pay more for greater convenience. So, as with China, the retail giant started to offer delivery and assembly as an added service.

These adaptations have made the second coming of IKEA in Japan much more successful. At the time of writing, there are now nine stores in the country.

It took IKEA a long time to become established in Japan. The current executive board will no doubt be hoping that the same process takes much less time in The Philippines.

The first store opened in Manila in 2020. To give the launch some impetus, IKEA created a branded “Jeepney” bus. This form of public transport is a cultural icon in the city, much like the yellow taxis of New York and the red buses of London.

It’s too early to tell for sure whether IKEA’s clever marketing stunt has worked. But we can definitely say that this remarkable retailer has fully embraced localization.

Given the scale and complexity of IKEA’s business model, you could easily write a full-length case study for each of the locations mentioned above.

Of course, that would be a lot to wade through. Plus, much of the content would not apply to your business.

So instead, here are some of the key localization lessons we can learn from IKEA:

It would be fair to say that IKEA didn’t do enough homework before entering the Japanese market in 1974. If someone had only talked to a few dozen locals, it would have been obvious that big bookcases and chairs were not going to be popular.

In comparison with the 1970s, research today is very easy. Localization experts will be able to inform you about similar cultural differences, and surveys can fill in the details.

If you are going to enter a foreign market, it is absolutely essential to do this stuff properly. Any cutting of corners here is likely to bite you in the end.

2) Listening to Your Customers Helps a Lot

Of course, research can’t tell you everything. Sometimes, you might put a product or service into the public domain and find that it’s not very popular.

Without some intervention, this could spell disaster for your operations in a foreign country. But what IKEA proved in India was that feedback can guide you away from troubled waters.

When meatballs were unpopular in Hyderabad, managers adjusted the menu to meet local expectations.

3) Localization and Standardization Can Work Together

In many respects, localization and standardization are polar opposites. One involves creating many different versions of products, while the other is about streamlining your operations.

However, IKEA has proven time and time again that localization and standardization can work together.

In general, the company uses a standardized model in order to keep costs low. However, small concessions are made where appropriate in order to grow the business in new markets.

Localization is applied as necessary, and internationalization helps to improve the experience for customers in other countries. For example, the visual assembly sheet has no written instructions — so anyone can understand it.

How to Start Localizing Your Business

Whether you run a multinational retail business or a small software company, a good localization strategy can open up huge opportunities in new markets.

The secret to making it work is using the right service provider and tools for the job.

At OneSky, we offer an end-to-end localization workflow that integrates with websites, apps, and even games. You can access over 1,000 expert human translators through our platform, along with machine translation and on-device testing.

Want to learn more? Download our free ebook guide, The Complete Guide to Localization Management, and sign up to try OneSky free.