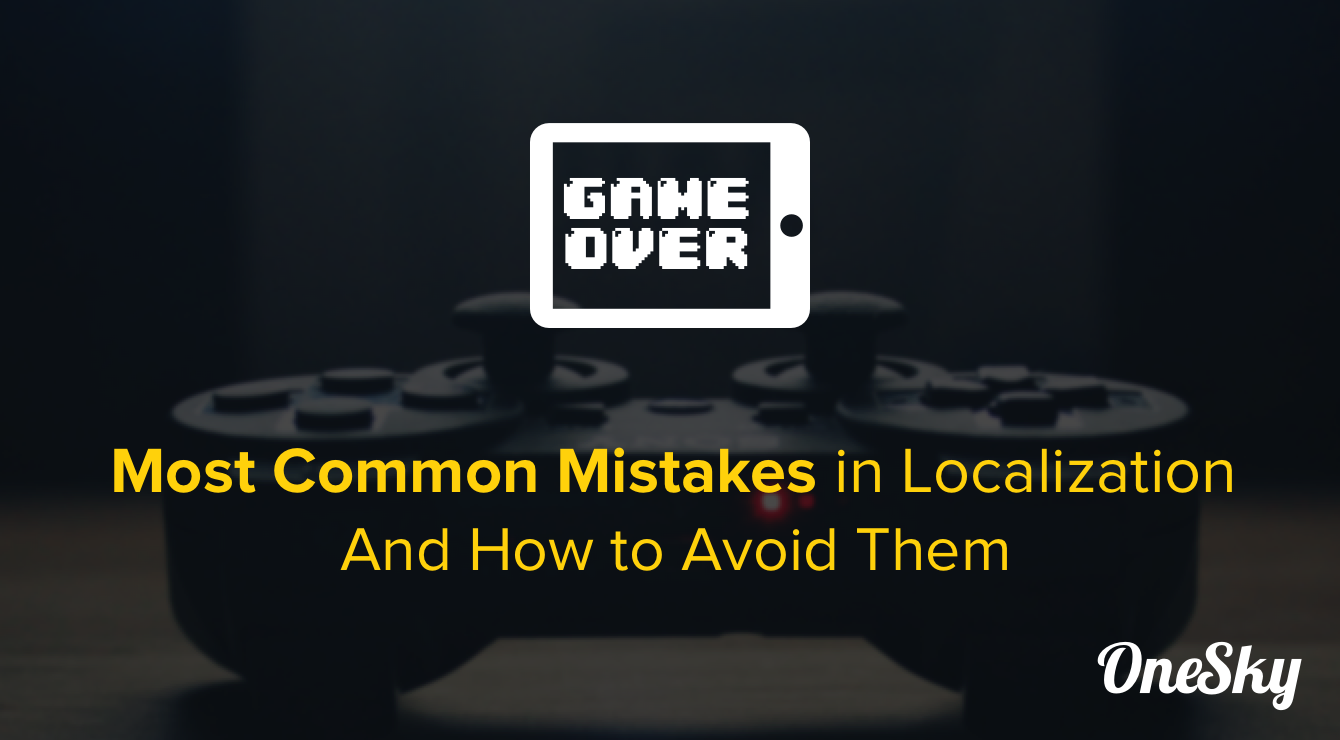 The Seven Most Common Mistakes in Game Localization

As we’ve discussed in an earlier post, mobile game developers often encounter huge roadblocks at international expansion. In this post, we’ll talk about the seven most common—and devastating—game localization mistakes that developers make. And we’ll provide some recommendations on how you may avoid those pitfalls.

To save time, some game developers hard-code their game’s text into the source code. For example,

In this example, the attack message “A player attacks an enemy” is embedded into the logic of the source code. This hard-coding text is a shortcut. But, like many shortcuts, you’ll pay for it later on.

Given that all the text is embedded in the code, you have to go back in and trace it every time you want to alter or update a translation. This slows down your translation effort and make it much more expensive to proceed.

Be sure to follow best string wrapping practices that fit the standards of internationalization. Also, when you’re extracting text from the source code, do so comprehensively, and make it into a resource file. (A resource file consists of key/value pair data). Save one resource file for each of your game’s languages. That way, managing all your translations will be much easier.

In regard to the example used above, a better way to wrap the strings should be like this:

A lot of game developers don’t take localization seriously. They just send their translators a big spreadsheet full of text without any images or other contextual information.

Context is crucial for translation quality, and without a sufficient sense of how the words are being used in context, translators can make serious mistakes.

For example, while translating the game Modern Warfare 2 from English to Japanese, translators accidentally turned the line “Remember, no Russians” into “Kill them, they are Russians.” With more context, the Japanese translators would have understood that Russians weren’t the target in this part of the game. Instead, they mistranslated it. Japanese gamers got confused and started shooting the wrong targets. They weren’t happy.

You need someone on your team who’s responsible for localization, such as a localization project manager. This person will respond to translators’ questions and prepare contextual information for the translators. (Tip: if you have a small team and can’t afford to make localization oversight a designated role, enlist your script writer for the project).

If you give your translators good contextual information, you’ll be likelier to get a great translation. This information includes:

A lot of games involve slang, including specialized gaming slang (think of the word “gank,” which has a special meaning to League of Legends players). Some games involve specialized terminology—say, sports terms, for a FIFA game—that require translators to do a lot of research. We call this research-oriented text.

Other games, such as QuizUp or Candy Crush, introduce a lot of new gaming concepts, so that translators are also, at some level, content creators. We call this creativity-oriented text.

Basically, regular translators aren’t always up to the task. Pick the wrong ones, and you may be in for a long, expensive, unsatisfying game localization experience.

You need translators who are native speakers and active gamers—and, preferably, familiar with your type of game.

Start by thinking about the content of your game in detail. Is more of your content research-oriented or creativity-oriented? Then examine the portfolios of game translators. What games has she helped localize before? What kinds of games does she play? Does she have experience with research? Experience with content creation?

Some developers don’t test-drive their localized games—which can leave them with a game that has all sorts of graphics and UI problems.

Also, in the final version, some strings may be missing due to hard-coding.

You can also set text space as autofit with the text, which helps to prevent some of these common UI problems.

The world is a diverse place. Gamers in different regions have different gaming preferences. Distribution and content regulations vary from country to country. And each mobile game market has its own unique ecology.

If you’re not prepared, certain features of a new market can blindside you (for example: in-app purchases are not allowed on Google Play in China). Your game content may be inappropriate for a particular market. It may need adjustment. When the original PC game Age of Empires arrived in South Korea, for example, its historical depiction of Japanese armies invading the Korean peninsula offended government regulators. In the end, Age of Empires had to create a downloadable patch that changed the depiction in a way that appeased the authorities (source).

You don’t want to be caught off-guard by cultural differences. Fortunately, you have a group of game-savvy locals ready to help: your translators. Ask them in advance for their observations about your game content.

Game developers sometimes do a poor job of organizing all the different formats and files. As a result, it’s easy to have mistranslations across different kinds of content, or to have duplicate translations made of the same piece of text—which slows the process down and raises costs.

A lot of game developers think of localization as something that occurs late in the development cycle. It’s a kind of extra step, for them, tacked onto the end.

Really, though, it’s unwise to treat localization like an afterthought. Doing so, you miss out on great opportunities in overseas markets. You risk getting overwhelmed by local clones, with nowhere to go. And, if you do decide to localize later, it’s much more expensive when you have to rework your source code and build up translation materials from scratch.

Think about localization from the start. Wrap strings at an early stage of game development, so that they’re ready for localization down the line. If you don’t do that, at least try to tweak your coding style to meet the internationalization standard.

Most of the world’s gamers are overseas. And that market is only growing. Be localization-ready, and you’ll be ready to conquer the world.

Do you have experience with a localization mistake that we forgot? Is there anything important that you think we’ve missed? Let us know in the comments!