France – the next m-commerce frontier

The world is migrating toward smartphones. As it does so, more and more retailers are trying to figure out how to drive mobile commerce. Those considerations don’t just apply in English-speaking countries, of course. Some of the most promising markets for m-commerce are countries with huge retail sectors and underutilized m-commerce channels.

Which brings us to France. In this post, we’ll introduce you to the promising m-commerce future of one of the world’s most vibrant retail markets.

Typical smartphone user in France: Middle-aged (35-49) men in urban centers, with high-paying jobs, form the core of the market.

French smartphone users tend to use apps more than websites on their phone. Relatively speaking, they use their phones at home a lot, because 4G coverage in France is patchy, and because public wi-fi access isn’t great.

Android has about 60% of the market share in France, and it’s growing. People are spending more and more time on apps, too. 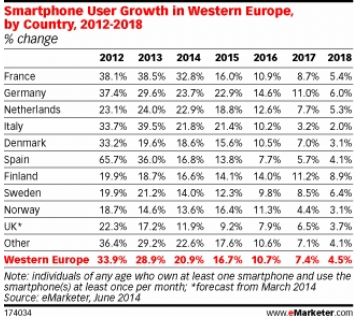 Compared to its neighbors in Europe and the United States, France has been slow to adopt smartphones. But as a chunk of the country’s enormous, €500 billion retail market moves online, France has the potential to become a major online consumer. Downloads of the top 25 apps from large retailers in France have grown almost 50% year-over-year. And iPad services remain an under-tapped market. 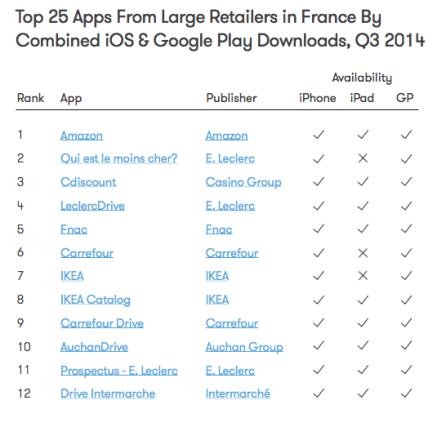 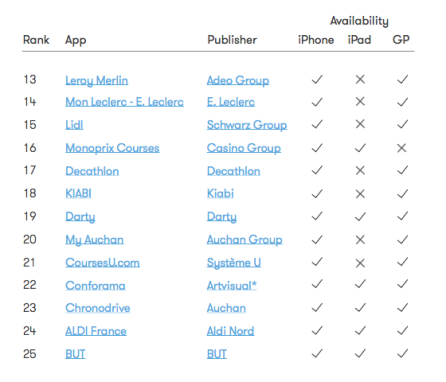 The slow shift to m-commerce is having an effect, especially in grocery sales. Sales at physical supermarkets in France dropped in the third quarter of last year, while distance sales are on the rise. In 2013, Kantar Retail valued the French e-grocery sector at $6.6 billion, which would make it 4% of overall grocery sales. That proportion is second in Europe only to the U.K., and the French online grocery retail market is well ahead of Germany, even though Germany has a much larger overall e-commerce market.

The expansion of the click-and-collect model (customers buy goods online, and then collect them from a physical location) is indicative of the evolving demand for immediacy in French retail.

You should bet on m-commerce in France

In 2013, only 8.0% of online retail orders in Europe were completed on a mobile device. In the United States, that number was 13.8%. The lesson is pretty clear: there’s room for growth in m-commerce in Europe.

That’s especially true in France: the country has a large retail market, and a (growing) majority of consumers already report using their smartphones to compare prices and research products.

A growing market, plus weak competition, creates opportunities. Retailers in France have a chance to upgrade their apps and, in the process, win a larger share of the accelerating m-commerce market.

The rise of French m-commerce

The demographics of e-commerce and m-commerce shoppers tend to reflect those of smartphone users in general, with one key exception: online buyers skew a little younger.

That’s one reason why m-commerce is such a promising area, looking toward the future. In 2016, analysts forecast that m-commerce revenue will grow to $15 billion, a 40% jump over 2015. And while small screens pose an obstacle, a full 21% of French people have already purchased something on a smartphone. Many prefer to make the purchase through an app.

As it stands, the overall e-commerce market in France is somewhat unusual. The most popular e-commerce platform in the country, Prestashop, has a small global marketshare. But it’s a French company, and does very well there. 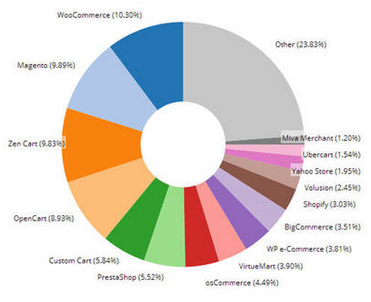 Use of e-commerce solutions in the world, BuiltWith study 8th of January 2014 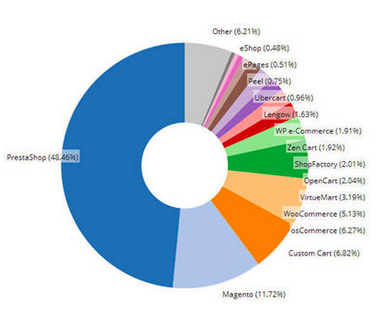 Use of e-commerce solutions in France, BuiltWith study, 8th of January 2014

The second and third ranking vendors, Magento and Custom Cart, are both American companies. For m-commerce specifically, Amazon draws the most traffic in France, with companies like Voyage-SNCF (which sells train tickets), CDiscount (an e-commerce specialist), Fnac (an electronics-focused retail chain) and LaRedoute (a clothing retail) all seeing significant traffic as well.

Make personalized marketing the core of your strategy

So how can developers break into the growing m-commerce market in France?

Personalized marketing is all about figuring out ways to send the right message to the right person at the right place and time.

It all starts with data: you have to analyze customer behavior, both online (who buys what on the web, when?) and offline (what kind of purchases take place in physical stores?).

The goal is to build a mobile platform that appeals to each potential customer as an individual. For the call to action, you want to create your own Onboarding mechanisms, too, instead of just relying on data from Google, Amazon, Apple, or Facebook.

If you do it wrong, clients will just turn to a competitor with a better app or mobile website.

In France, 54% of customers say that they’d buy more if their interfaces were personalized. More than two-thirds of French consumers say that they’re ready to receive a personalized discount voucher on their smartphone while they’re in a store. And 58% are open to advantage programs that offer perks to loyal customers.

But, so far, just 46% of consumers in France say that mobile internet has changed their way of buying—substantially lower than the 55% of consumers, worldwide, who say their shopping patterns have changed since the mobile revolution.

In other words, there’s room for growth.

Let see how Sephora did it right

Sephora, a French beauty products company, has been a pioneer in e-commerce and m-commerce. According to an L2 Prestige study, Sephora had the best mobile competencies of 100 prestigious brands surveyed.

Sephora’s strength comes from a blend of in-store marketing with mobile tools. Throughout its physical stores, the company places calls-to-action for Beauty Insider, its special loyalty program. 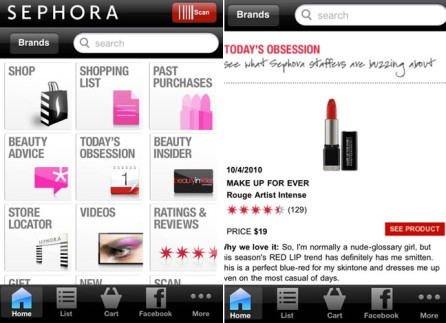 The My Beauty Bag feature, for example, lets customers collect their favorite products in one digital space, where they can then track past purchases and go shopping when they need to replenish supplies. It’s a personalized shopping center. Sephora’s Pocket Contour Class, also on the app, uses smartphone cameras to determine the shape of users’ faces. It then creates a personalized tutorial about makeup application, using the actual image of the client’s face as the model. 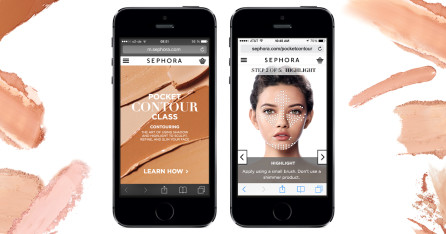 And for Sephora, these tactics seem to be working. The company has seen a 150% growth in mobile sales over the past year.

France has one of the world’s largest retail markets. It also has a big pool of smartphone users who are open to the idea of m-commerce, even if they aren’t doing much mobile shopping yet. Through smart marketing and personalization, mobile retailers have a chance to open up major new frontiers in one of Europe’s largest economies.

Maelle Nys is working in the Management team at OneSky. As a French she contributes in building a more global content. Passionate by all new ideas that can make life easier and more beautiful.