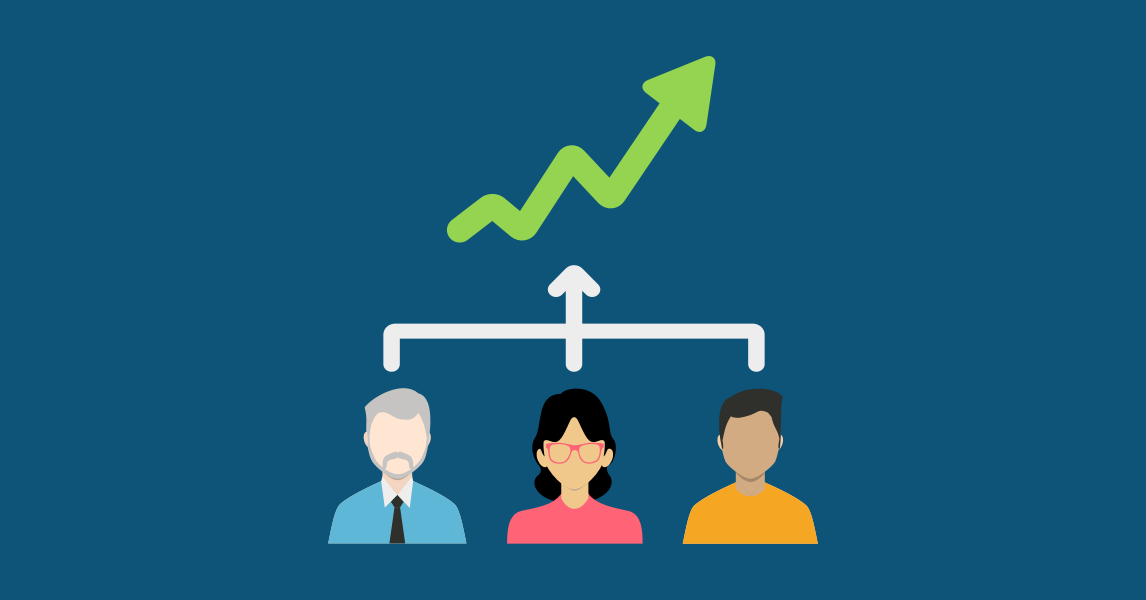 Why Diversity is Good for Tech Startups Aiming for Global, and How Buffer Nailed It

Diversity: not just a buzzword

Diversity isn’t just a buzzword. Having a mix of people can make a team more resilient, more adaptable, and better at problem solving.

We all get stuck when we’re making decisions. When we’re surrounded by people like us, there’s a tendency for everyone to get hung up on the same things, or share the same weaknesses and blindspots. A more diverse group is better able to approach a range of problems. In other words, they’re better at getting unstuck.

What is diversity, anyway?

When we talk about having a diversity of people, we refer to all sorts of things, including gender, ethnicity, sexuality, and age. In this case, we’re talking about basic markers of identity.

When we’re talking about a diversity of backgrounds, we’re talking about the whole range of human experiences and personality—people with a variety of tastes, skills, styles, personal histories, and ways of thinking. Two people can look quite different, but think in the same way.

The data is clear: diverse companies do better. According to a major report from McKinsey, U.S. public companies with more diverse executive boards have a 95% higher return on equity than those whose boards are homogeneous.

The advantage isn’t industry-specific. Large and small companies alike benefit from having a diversity of people—and therefore a diversity of perspectives—in the boardroom. After all, a mix of opinions is how you develop innovative ideas and push the status quo.

Want to go global? Be inclusive!

In a globalizing world, the most successful companies are those that are able to form connections around the world. If you have a startup that wants to conquer the globe, you’ll need a workforce that reflects and embraces this kind of geographic, multicultural scope.

In that kind of work, a diverse team will give you the range of backgrounds, personalities, and simple cultural know-how that’s needed to generate global strategies. Diverse teams can access niches that, working alone, you’d never even realize exist. And when you’re open to hiring people from all sorts of backgrounds, you can focus on what really matters—talent, which comes from all places. The bigger the pool, the better.

It’s not just that diverse workforces have more ideas. When working with a people from a mixture of cultures and backgrounds, individuals tend to change their ways of thinking. In one study, researchers put 200 participants in 29 mock juries. They found that panels that were ethnically mixed—in this case, with both black and white participants—performed better than all-white groups on a number of metrics.

“Such diverse juries deliberated longer, raised more facts about the case, and conducted broader and more wide-ranging deliberations,” said Samuel Sommers, a Tufts University psychologist who led the study. “They also made fewer factual errors in discussing evidence and when errors did occur, those errors were more likely to be corrected during the discussion.”

Homogenous groups, it seems, tend to be overconfident and less self-critical, which are dangerous traits for a team trying to negotiate a difficult set of challenges. Homogeneity can stifle the exchange of ideas and limit the scope of discussion.

If you treat diversity as a novelty, or as a symbolic gesture, your effort is less likely to succeed. Only by treating it as a serious priority, with which to build a more effective team, will you be able to create truly diverse team.

How Buffer created an inclusive culture

Ideally, diversity is there from the beginning. Once a homogeneous culture is in place, it can be hard to dislodge. After all, change is increasingly difficult as any organization grows.

Consider Buffer, a social media scheduling app. Buffer is a great example of a company that has made having a diverse team—both in terms of people and backgrounds—a priority from the start, with benefits to the company’s culture, and also its bottom line.

Buffer determined its core values in the first months of the company. At the time, they only had seven employees. But they decided, as they grew, they wanted a transparent corporate culture, and a diverse team. They built an inclusive culture through a few key tactics.

Start from the top

For Buffer, a big part of building diversity was about awareness, and a focus on management. Like many companies, Buffer found that one result of hiring diverse managers was getting a diverse staff.

Pull out the diversity data

Data has also been central to Buffer’s efforts to build a diverse team. The company, which now has 34 employees, has built a diversity dashboard that lets them map the backgrounds and experiences of their applicants, and to adjust hiring if they need to be more inclusive. Above all, data can be a way for more conscious growth—and to think about diversity that encompasses many different kinds of people.

The goal is to stay in line with the company’s core values. It’s also to have a team that’s representative of the wide audience that Buffer is trying to reach. 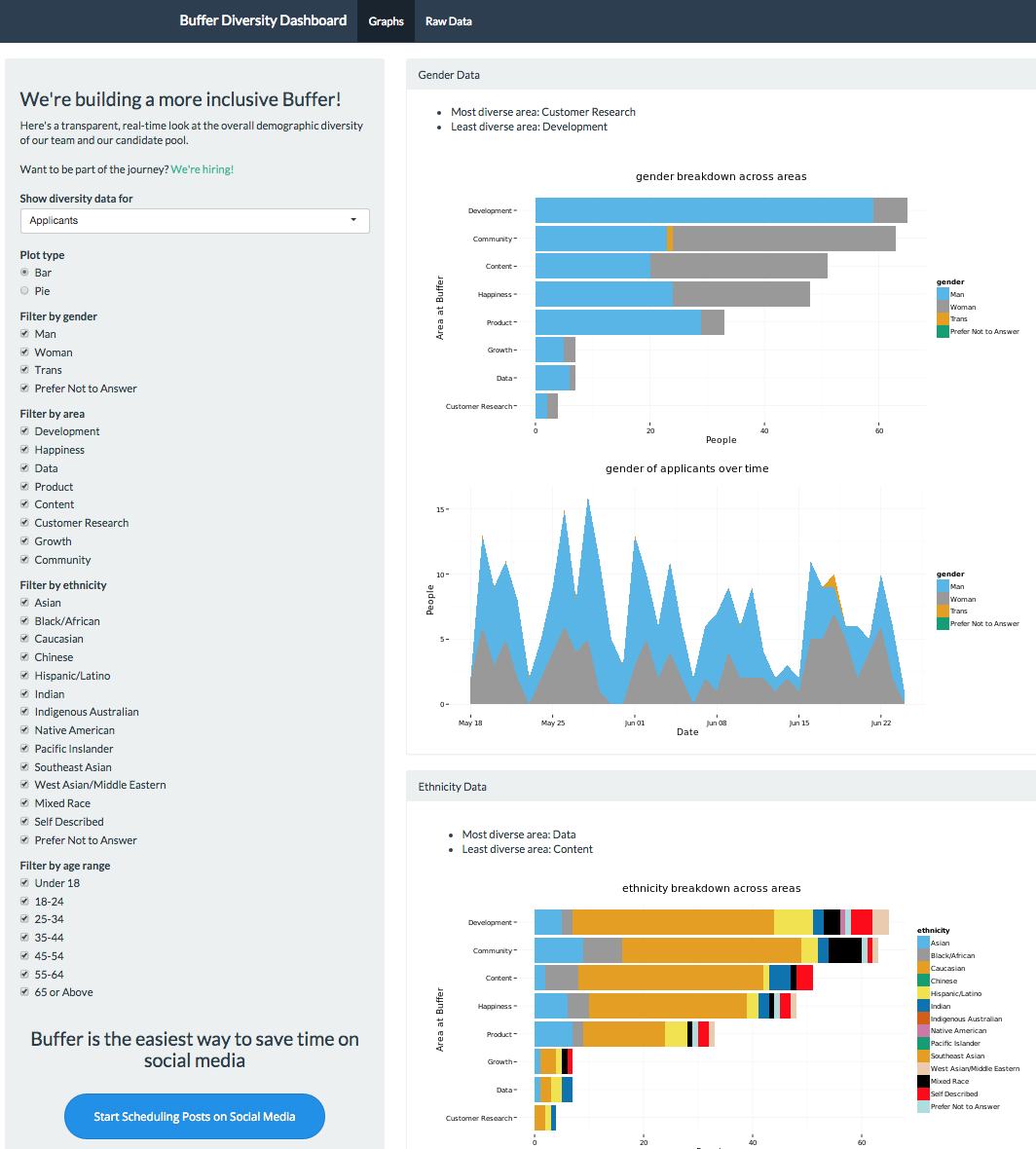 Certain job descriptions can turn off prospective applicants—often in ways that people don’t realize. For example, the term “developer” is more appealing to female applicants than “hacker,” which tends to be a word with less inclusive connotations. 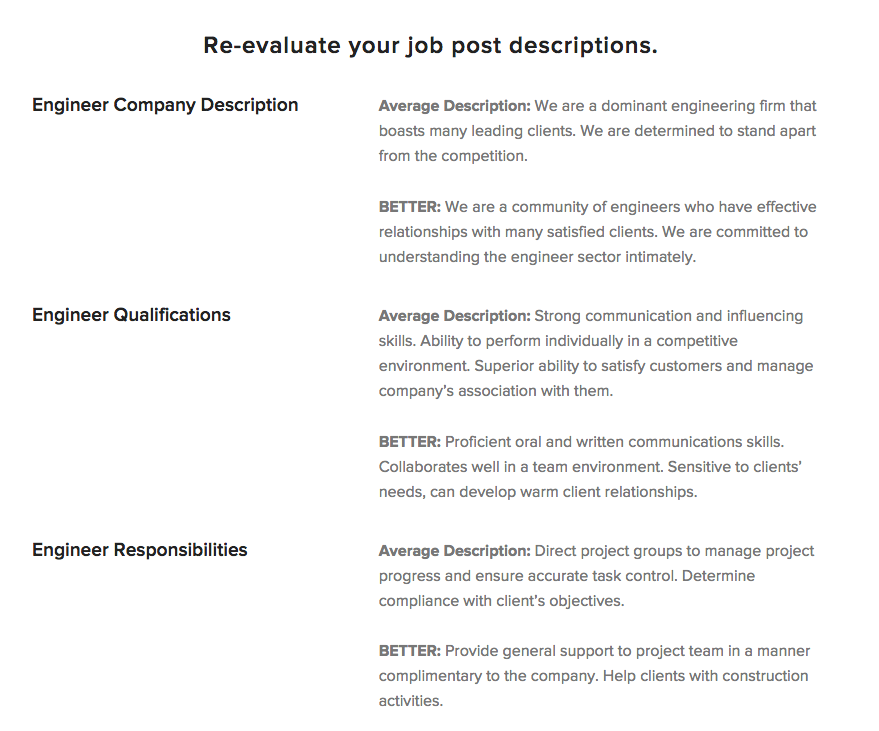 One recent study found that certain words could lead job descriptions to act as gendered signals. Job descriptions for male-dominated fields tended to include more words having to do with individual action—words like active, ambitious, competitive, confident, independent, and leader. Words having to do with teams and relationships—like committed, connected, interpersonal, supportive, and trust—tended to signal jobs in fields with more women.

These findings suggest that the basic wording of a job description can alert female applicants to the possibility that they’ll be in a significant minority or feel out a place. A few minor tweaks to language can help you draw a bigger applicants pool.

At Buffer, a key part of building a diverse team has been helping employees build inclusive values. They do so with a basic seven-step rubric that includes everything from asking employees to use more inclusive language, to empowering mentors for people from underrepresented groups, to using social media to amplify new voices.

Values aren’t enough—policies matter too. In particular, Buffer has put in place a family leave policy that includes self-managed family leave, more opportunities to work remotely, and perks for families. These kinds of measures can be especially important in making the workplace more welcoming for women.

By making diversity a core value, Buffer has been able to keep itself inclusive as it grows. As Buffer has found, the more diverse the people at the table, the more perspectives you’ll get in the conversation—and the stronger the discussion will be. From discussion comes innovation. And that’s what every startup needs.

Increasingly, startups need to be adaptable and global in their outlooks. That kind of culture comes from drawing all sorts of people into a group. Overcoming homogeneous institutional cultures can be tricky, but with strong values, an open mind, and close attention to language and policy, companies can build the teams they need to thrive in the 21st century.

Have you had experiences creating more diverse workplaces? Any tips to share? Let us know in the comments!

Maelle Nys is working in the Management team at OneSky. As a French she contributes in building a more global content. Passionate by all new ideas that can make life easier and more beautiful.