This post is part of our new series “Translation Challenges” highlighting the unique difficulties in translating to specific languages. With each language, we’ll also offer some insights into the opportunities of localizing to that language. We’ve written on Spanish translations, and future posts will cover other popular languages like German, Chinese, and many more. Subscribe to our blog newsletter so you don’t miss out!

French speakers are virtually everywhere. It is the only language aside from English spoken on all 5 continents with more than 280 million speakers around the world, including 68 million native speakers. In fact, it is the second most-spoken native language in Europe.

With its Italic-Romance roots, French is also, interestingly, the largest donor of words to English, with its Germanic heritage. Many words in the English language come from French influence. Quelle surprise!

With its detailed grammatical structures, French is considered an international “language of reference.” Among the 6 official languages of the United Nations, French is the only other working language used aside from English. It is one of the 3 procedural languages in the European Union and is the only language used for proceedings of the European Union.

With this wide reach around the globe, it’s easy to see why businesses would be interested in translating materials into the French-speaking market.

Bloomberg reports that French is the second most useful language for business after Mandarin, with 27 countries having French as an official language.

However, only about 4% of all internet content is in French. Many French-speaking countries rank low in English levels—including France itself. Both of these facts, in combination with research showing that consumers prefer reading and making purchases online in their native language, makes the French-speaking market ripe for high-quality native, translated content.

Translating to French is tricky

French is a Romance language with its Latin roots—it just happens to also be widely known as the “language of love.” However, as with any language translation, making English fit into a French context is no easy courtship. It is particularly challenging because of the different linguistic roots of the two languages.

Here are 5 common challenges in English-French translation and how you can best prepare for them:

1. There is no One True French — there are multiple.

Just like there are variations in the English spoken in North America, the UK, and Australia, there are significant differences in the French spoken in France, Belgium, Monaco, the Middle East, Canada and the United States.

While these differences are most apparent in pronunciation, there can be significant cultural differences in grammar, formalities, as well as names of food, clothing, and everyday objects.

Depending on where your target user or reader is located, it’s worth identifying the specific French spoken and translating for that strand of the language specifically. If you don’t do this, you risk your audience becoming confused, or worse, frustrated that you did not actually know them—and their language—well.

2. French is a longer language

Not all languages are created at equal lengths. Some naturally have more words in the sentence structures than others. Research shows that French translations are about 15-20% longer than their original English text.

3. French has many cultural markers unique to its own language

The level of formality built into every language is different. In French, the formal pronoun to “you” (“vous” instead of “tu”) and a more elevated title are often used as a sign of respect or in a formal setting, depending on region.

4. French and English have completely different styles of grammar

Because of its different language origins, these two languages are very different in basic grammar. These are some key differences:

Despite using the same Subject-Verb-Object structure, French offers many variations in word order that don’t make sense in English syntax.

For example, “I play sometimes basketball” or “It was the book the best I have read” make perfect sense in French grammar but sound nonsensical when directly translated into English.

French is a two-gender language, meaning nouns are assigned genders, like in French, and can be considered male or female.

There are no rules to this, and knowing what nouns are feminine and masculine can get very confusing very fast!

There are 5-6 different spellings for each verb tense in French, depending on the subject, but English verbs are altered by suffixes for each tense. Not to mention there are many special cases for conjugating unique verbs differently that must be memorized.

Take “manger” (to eat) as an example. The verb in English is only modified in the third-person singular, whereas it conjugates into 3 subjects and numbers in French, making six versions of the verb in each tense. So we say “je mange, tu manges, nous mangeons, ils mangent” to mean “I eat, you eat, we eat, they eat.”

French adjectives are also altered by the gender and number of the noun, but English adjectives never change.

Despite their different origins, many words in French and English look very similar, even though their definitions could not be more different. This is because, like other Romance languages, a lot of French actually evolved from Latin, which English is influenced by. As a result, English and French share many words in common from Latin, despite their definitions evolving differently over time. These are known as “false friends.”

“Avertissement” in French looks like it might refer to a marketing ad in English when really, it means “warning.” “Déception” appears to refer to a very serious lie but its English translation is actually “disappointment.”

Be careful – weeding out false friends is especially important to the translation process because they can fool non-native speakers without appearing obviously tricky. Imagine accidentally telling a French speaker you want to “blesser” them after they sneeze, but they think you want to “hurt” them instead!

Hire a bilingual translator with high fluency in both English and French so they won’t be fooled by false friends. In your own translations, do occasional spot-checks and look up words that seem like an English word you know, so you can make sure these similar words don’t fall through the cracks.

With its rich history and diverse varieties, the French language presents many interesting and engaging challenges in translation. If you’re interested in getting text translated to or from French, we offer professional translation services for French, as well as 50+ other languages.

Looking for a more holistic guide to producing and managing high-quality translations? Check out our step-by-step Project Manager’s Guide to Improving Localization Quality: 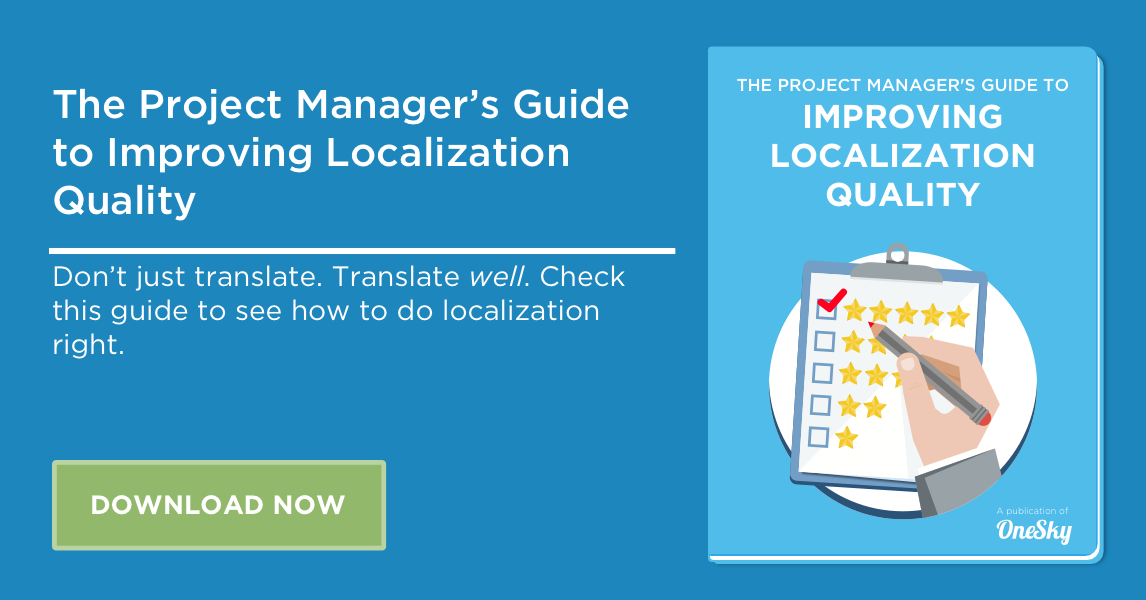 This entry was posted in Localization 101 and tagged translation challenges. Bookmark the permalink.