In the past 12 months, OneSky worked with over 1,000 businesses and organizations around the world to localize their apps, games and products for more than 65 markets. As a localization specialist, OneSky is delighted to help our customers expand their global footprints and be an integral part of their successes. With the beginning of the new year, we thought it’d be a good opportunity to highlight some of the localization trends that we saw in 2017, and make a few predictions for 2018.

In 2018, European languages is expected to remain in high demand. However, the growth rate of these markets is forecasted to be significantly slower. 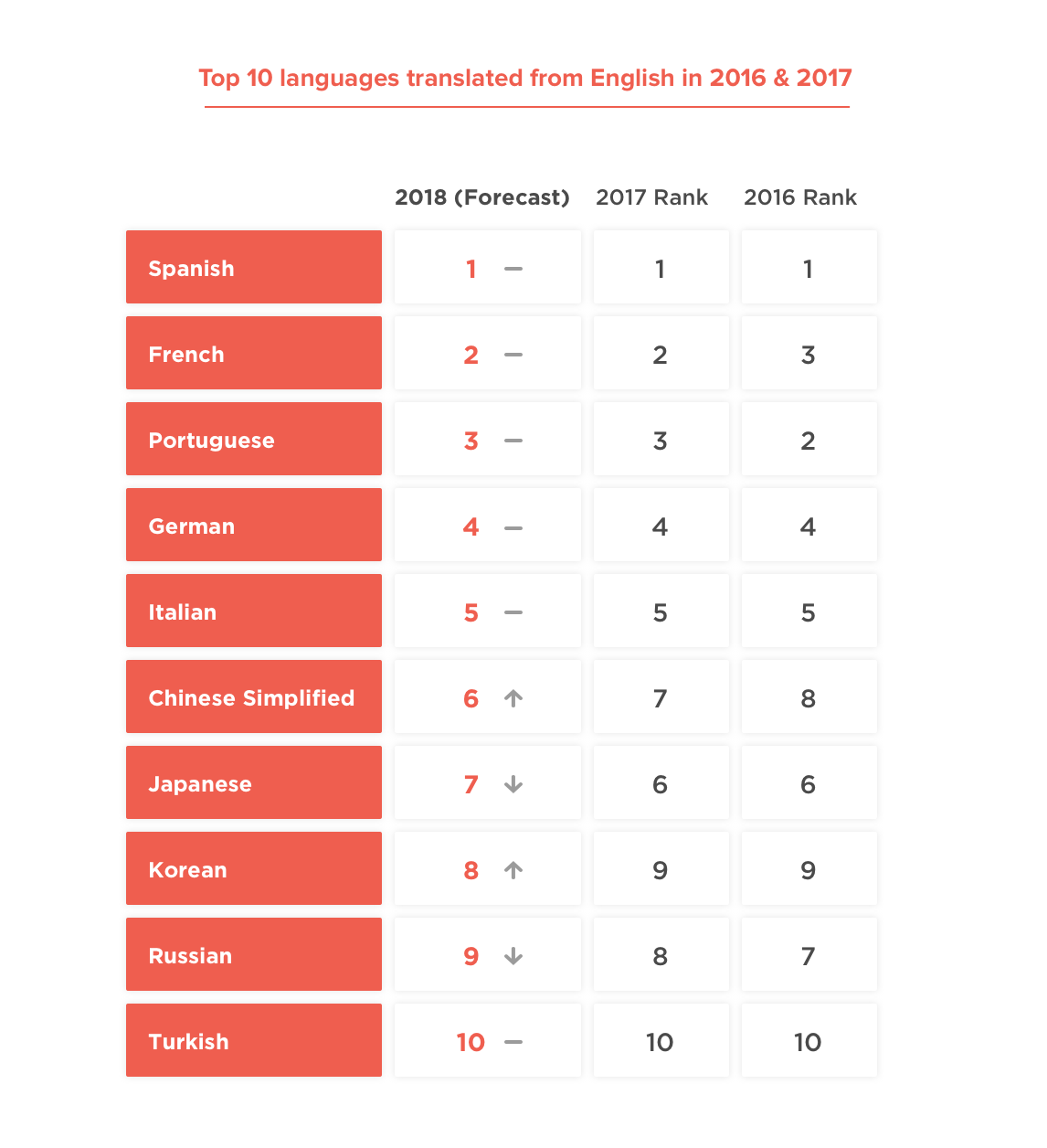 ^The data is comprised of OneSky‘s total number of orders in 2016 and 2017 and the 2018 forecast is based on an internal algorithm.

With high smartphone and internet penetration, Europe continues to be a mature market with high app revenue potential. Bound by its relative proximity and cultural similarities, many European-based app developers and publishers that we work with often begin their expansion by targeting neighboring countries and North America. It is no doubt a good way to start and test the effectiveness of their initial localization workflow.

However, according to a recent report conducted by Hootsuite, the growth rate of European app market is expected to decrease by up to 50% within the next few years. For European-based organizations who are looking beyond their home country for growth opportunities, you may want to consider some of the more mature markets with steady high growth rate in APAC, most notably Japan, South Korea and China.

In the past two years, we have seen a significant increase in the localization demands for languages in emerging markets. 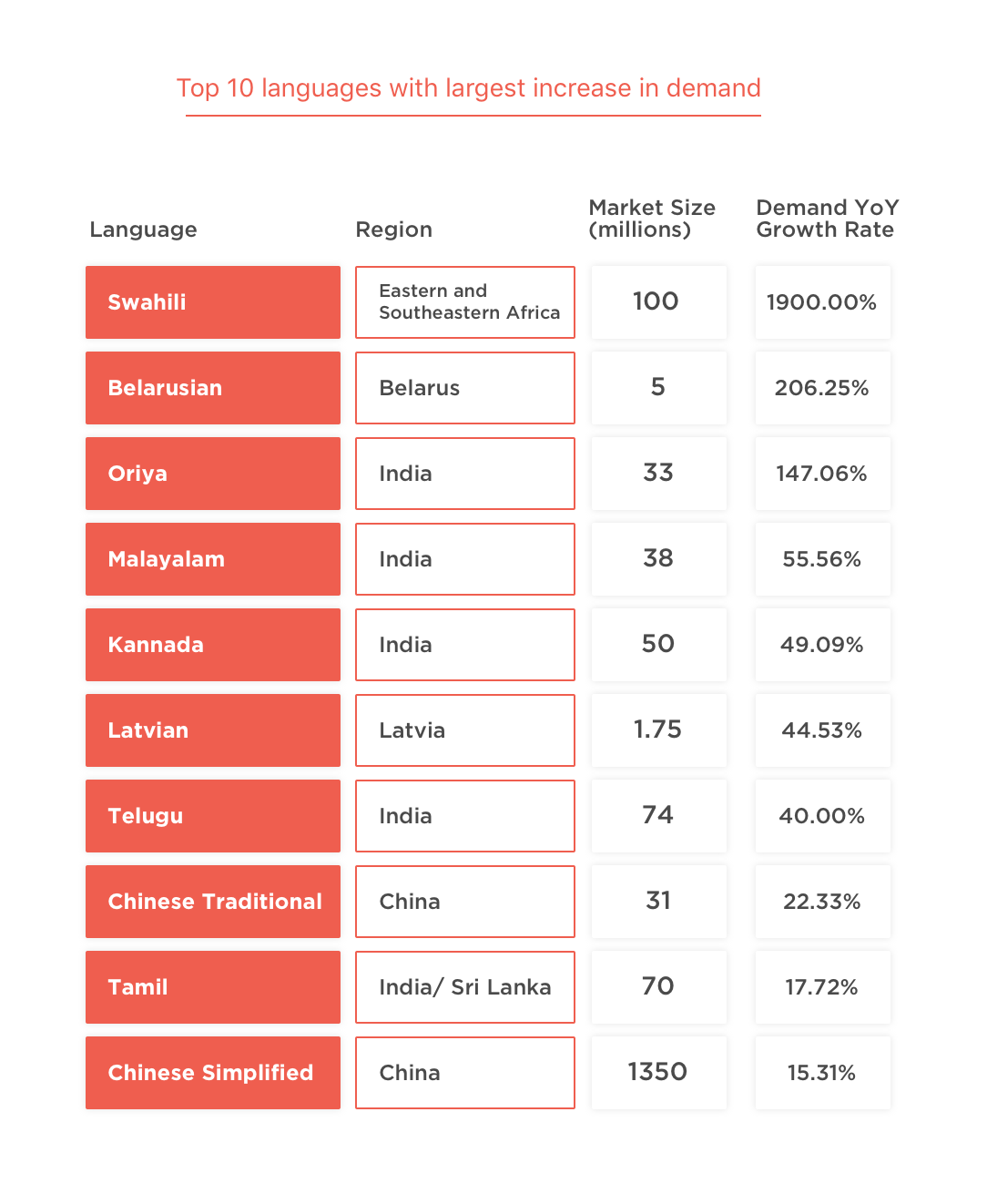 ^The demand year-over-year growth rate is determined by comparing the number of orders submitted to OneSky in 2016 and 2017.

In 2018, we expect the demand for emerging markets to continue to increase — especially for China and India. The table above shows that 7 out of the top 10 languages with largest increase in localization demand are spoken in China and India. Considering the actual number of orders of these languages, the demand for Chinese Simplified and Chinese Traditional far exceeds the others. We will further elaborate on this below.

It is worth noting that apart from the two giant markets, many companies has also started targeting regions in Africa and Eastern Europe.

3. China to be the largest market for generating app revenue 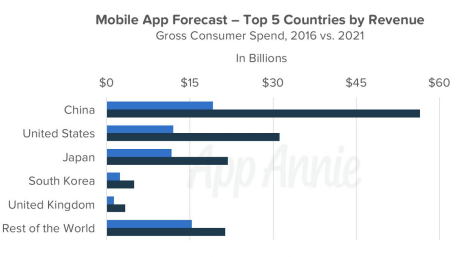 ^Graph showing the growth in app revenue in China market, by App Annie.

According to a Market Forecast by App Annie, China will continue to be the largest app market across the globe and is expected to exceed $56 billion in 2021. China is a highly attractive market for several reasons. Not only does China hold the world’s largest population, but it has also seen explosive growth in terms of smartphone penetration. From a cultural standpoint, China bears resemblance to many other mature East Asian market (e.g. Japan). This is particularly relevant as it relates to the amount spent on discretionary items, such as entertainment and games.

Although the Chinese market has many advantages, the barrier to entry is also very high. App publishers who wish to successfully enter China should make localization a priority. This can be achieved by partnering with local agencies who can help bridge some of the deep-rooted cultural differences. If you’re considering launching your product in China- particularly games and entertainment apps- make sure to check out our previous blog post – 6 Tips to Succeed in Chinese Mobile Game Market.

4. India to be the market with spectacular growth in app downloads 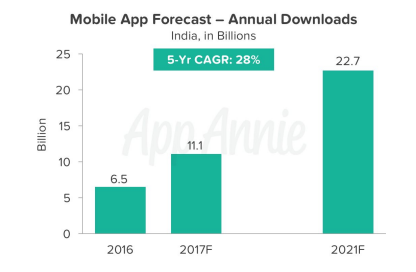 ^Graph showing the growth in app downloads in India market, by App Annie.

In this year Google I/O Developer Conference, Google Product Manager Tal Oppenheimer shared some global insights in the overall state of the app market. India alone saw 100 million new internet users in both 2015 and 2016. And this rate won’t be winding down soon – around 60% of the India’s population is still offline today.

While there was an initial lag in India’s smartphone adoption rate, the number of app downloads in India is now forecasted to grow 28% annually to nearly $23 billion by 2021 – higher than the United States and only second to China.

Although localization is essential for any company who wish to successfully break into emerging markets, there are a few principles that you should abide by. Make sure to check out our previous blogpost on this – Google Developers’ 5 Tips on Building for Emerging App Markets.

Now that we have established the roles that emerging app markets like China and India are expected to play in the coming years, it is also important to understand the specific localization needs for the non-English speaking markets.

An app user in Germany, for instance, may have very different expectations from one in Japan. Indeed, according to App Annie, between 30% and 60% of the top 25 iPhone apps in East Asian countries – Japan, Korea and China – have a localized app name. In addition, nearly half of the top 25 iPad apps in China are localized in Chinese.

^Graph showing the % of iPhone and iPad apps with local language names in National Top 25, by App Annie.

The graph above shows that users in the East Asian countries tend to prefer to download and spend money on apps that are localized in their languages. To crack these markets, it’s generally a good idea to have a good understanding of what users expect. 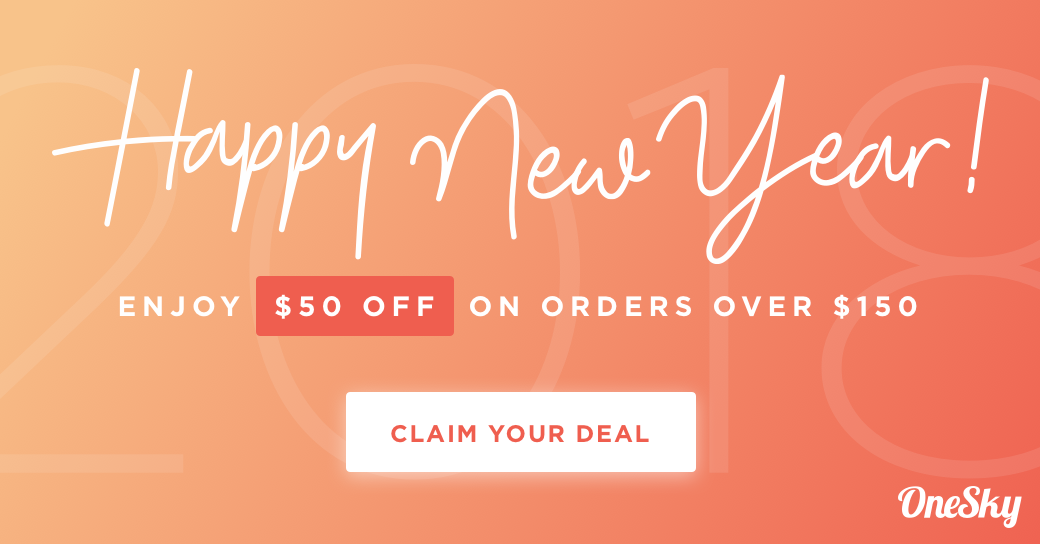 As the new year begins, OneSky is offering a $50 coupon* to all who are kickstarting their next localization project until 31 Jan, 2018. Simply redeem the discount by entering the coupon code ‘NEWYEAR18’ on the checkout page. If you are planning for new localization projects, claim your gift from us now!

Candy Li is a digital marketing specialist at OneSky. She is always enthusiastic to learn and excited to share the latest news and trend in the industry.