Many US companies still don’t really think about the language of their content, which means there are big opportunities for the companies that do. Because English has been so influential around the world, content used to be rolled out around the world without localization. That fact is changing rapidly as consumers are beginning to demand more relevant content. 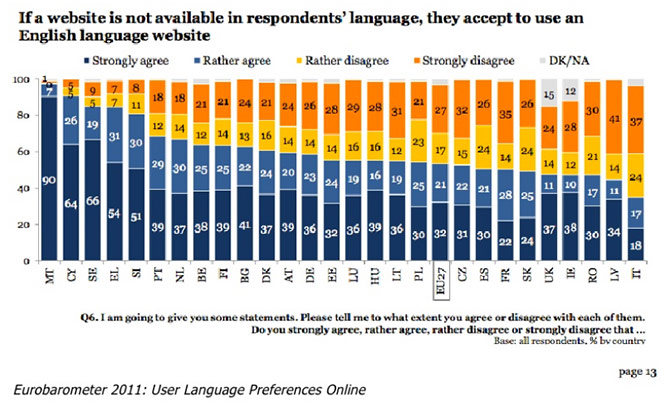 English is considered the world’s most influential language by far, based on criteria such as number of secondary speakers, economic power of English speaking countries and the number of fields where English is important. However, a recent series of Gallup polls in Europe found that a majority of Internet users (55 percent) used more than one language to read or watch content online. Surprisingly, in a few countries like Italy and the Czech Republic, a majority said that they only used their own language to read and watch content.

In the new global economy, American companies are waking to the profit and potential of content localization. In fact, nearly half of marketers (49 percent) in a survey by the CMO Council, said that localized marketing is absolutely critical to their business growth. Localization affects not only profitability, but also elementary demand generation and sell-through rates. That same study revealed that nearly 9 out of 10 marketers (86 percent) planned to search for better ways to adapt and localize their content for more direct prospect engagement.

One of the reasons that localization isn’t done more, despite the clear ROI, is that getting it right can be extremely difficult. At the Confab 2012 Conference, Lise Janody, owner of Dot-Connection, offered some great insights about the biggest stumbling blocks that companies face.

An effective content localization plan involves much more than just content translation. For example, neighboring countries can require completely different terminology, which complicates collaborations and analytics. In terms of branding, marketers have been perplexed about how to retain a consistent tone and voice while appealing to very different audiences in different languages.

Despite all the complexity, though, the profits and market share bear out successful localization and there are some guidelines that have been developed to streamline the process. Companies without experience in the subtleties tend to take a generalized approach to content localization. The result is invariably a much larger invoice than is appropriate or a localization that completely misses the target audience.

In her Checklist for Content Strategy, Erin Kissane identified three major areas that deserve the most attention. Localized content should be:

Setting the right targets for yourself before you begin introducing the product to the new market. Make sure you understand the market size and your own share potential. Consider internal, market and cultural forces in comparison with your own objectives. This is also the time to identify gaps in your most crucial tools such as your translation and terminology management.

Content localization isn’t a new trend, but its only now becoming the new standard. Companies that are successfully integrating their content into the lives of their users in other countries are the ones with a comprehensive strategy. Effective content localization cannot simply be generated as an afterthought. There needs to be a feedback loop that your company arranges with its language service provider in order to continually refine the content translation. Remember that, in the end, increases in trust and persuasion will directly result in more sales and revenue.