Among these challenges, ranging from budget concerns to crafting good story content to marketing your game, one problem that comes up over and over again is app discoverability.

According to data from Newzoo Games, mobile games are generating 37% of the $99.6 billion revenue from the gaming industry this year. It’s a rapidly growing and exciting market—but also a hard one to get noticed in.

Our client, Hong Kong-based game developer Blue Tea Games, faced the same challenges prior to launching their largest game Mavenfall: in a sea of mobile games, how do we stand out? And how can we make sure the right players can find us?

Through localizing with OneSky, Mavenfall went on to achieve global success, becoming featured in the App Store as a “Best New Game” in 120 countries.

This week, we got the chance to ask Blue Tea Games Founder and CEO Steve Zhao to walk us through 5 lessons and best practices he’s learned throughout the localization process. This blog post will cover:

1. Localization is a must to reach a global audience in mobile

Blue Tea Games was founded by Steve in 2007 while he was still in college and became known over the years for their hidden object PC games. The company’s first mobile game was released in 2014.

It was successful, but not to the global scale the company wanted to reach. They realized they needed to translate their game in order to reach gamers around the world, instead of just the English-speaking market.

The plan to pursue localization was a no-brainer.

“Localization is an important step for any game looking to grow beyond its national borders and reach a global audience,” says Steve. “It’s pretty much required for mobile nowadays.”

2. The number of languages can be strategic

Considering Mavenfall is BTG’s first localization effort, it might come as a surprise that Steve decided to translate the game to 14 other languages.

This number, too, was a part of Steve’s localization strategy.

He explains that, because of Apple’s global marketplace, with its 155 local App Stores around the world, it was the safest bet to translate Mavenfall to at least 14 languages, so they have a higher chance of being featured in App Stores globally.

“Localizing to many languages certainly explains why Apple featured us.”

Blue Tea Games’ localization strategy had the end-goal of being featured, and translating to as many languages as they could handle played into that strategy.

Keep in mind: different localization strategies will involve different benchmarks for the number of languages to translate to.

For example, if you know your key userbase is spread across 3 countries speaking 2 languages, it would be more strategic to translate to those 2 languages to begin with through Minimum Viable Localization (MVL) instead of selecting the most popular 10 languages.

3. Quality and speed are essential to translations

Regardless of the number of languages, Steve emphasizes that quality and speed are essential to a solid localization plan.

He says part of choosing OneSky for his translation needs was our ability to deliver translated texts under a tight deadline.

“The short time to launch was important for us to secure app store features. We needed the languages fast, and that’s why we came to you guys.”

Quality of translation was an essential part to BTG’s localization plan as well—especially in maintaining contextual accuracy.

Through the OneSky platform, Steve was able to get an instant quote and take advantage of our screenshot and glossary plugin features. Being able to upload a screenshot of how the text looks in the actual game is “crucial for mobile gaming” from a game developer point-of-view, he says.

“The glossary feature was great for defining key terms and being able to communicate that to the translators.”

Steve says that working with OneSky instead of a traditional Language Service Provider (LSP) translation company also made a huge difference in their workflow efficiency.

Through the screenshot feature, OneSky translators were able to stay under suggested word count limits for over-long text that conflicted with the game’s visual design. The glossary feature allowed BTG to define what keywords in the game mean and how they should be translated, which allowed translators to then maintain consistency across the game in all 14 international versions.

“If I worked with a translation company,” Steve explains, “they would not be able to see the game context for the key terms. Our OneSky translations were bullet-proof in a sense.”

Through careful localization planning and attention to speed, quality, and a strategic number of translations, Mavenfall was able to achieve major exposure and growth through App Store features and an influx of new international users.

The game’s successful localization was a big win for Steve and BTG: “Our localized game got the #1 spot in Hong Kong, #2 in Japan, #3 in US, and #4 in China. 3000 apps get launched every week and we took every spot. We were Top 10 in 110 countries. Apple only updates their ‘Best New Games’ features every week. It’s a big deal.”

Steve was excited as well about Mavenfall’s success in Asia, particularly in the new large userbase in Southeast Asia. Their original targets were the most popular markets for mobile gaming, so their expansion into the likes of China, Japan, Korea sets them up nicely for successful future launches.

When we asked Steve if he had any advice for other game developers considering localization, he pointed out that it’s helpful to think ahead in the game development process.

“Try to design visual interfaces with localization in mind,” he explains. “Allow extra spaces in fixed interfaces or create dynamic sizes for things like speech bubbles.” That way, you’ll avoid running into a few tricky challenges with text integration later in the localization process.

Blue Tea Games is a Hong Kong-based developer for mobile and PC games. Since 2003, it has developed over a dozen original titles across multiple genres, such as puzzle adventures, RPG, simulation, and time management apps. Their games have reached millions of players far and wide through 10+ translations and across various platforms – PC/Mac, retail, and mobile.

Interested in having your own mobile game featured in 100+ App Stores? Check out our step-by-step Beginner’s Guide to Mobile Game Localization: 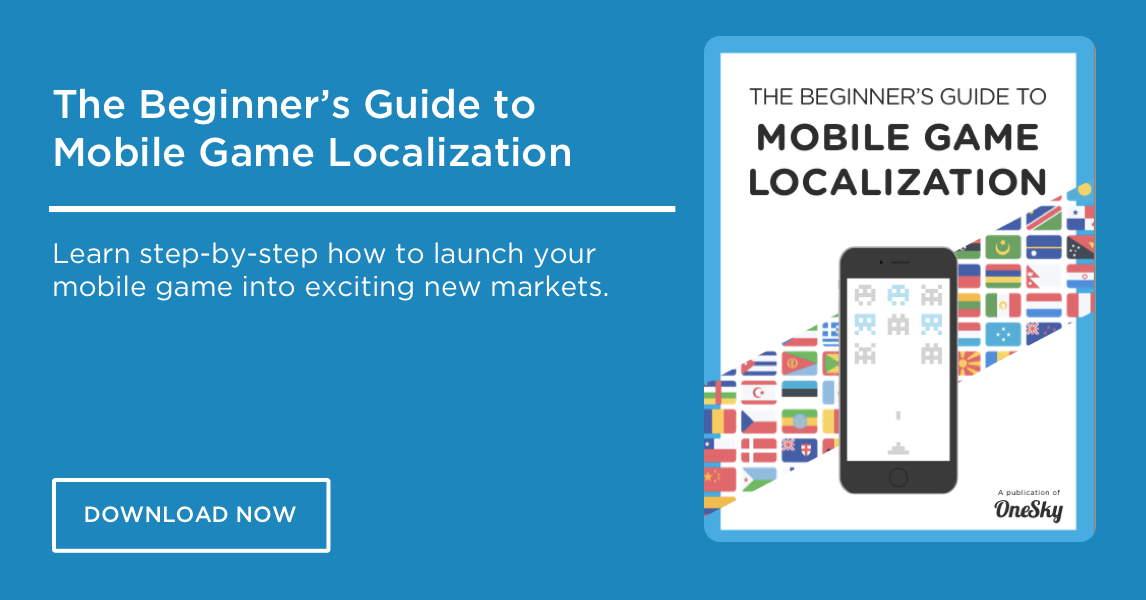 This entry was posted in Case Studies, Game Localization. Bookmark the permalink.