For app developers, that’s great news, because Japanese smartphone gamers are huge spenders. According to Distimo, the average game download in Japan is worth $6.34. Meanwhile, getting new downloads is pretty cheap—just $1.86 per download, on average. 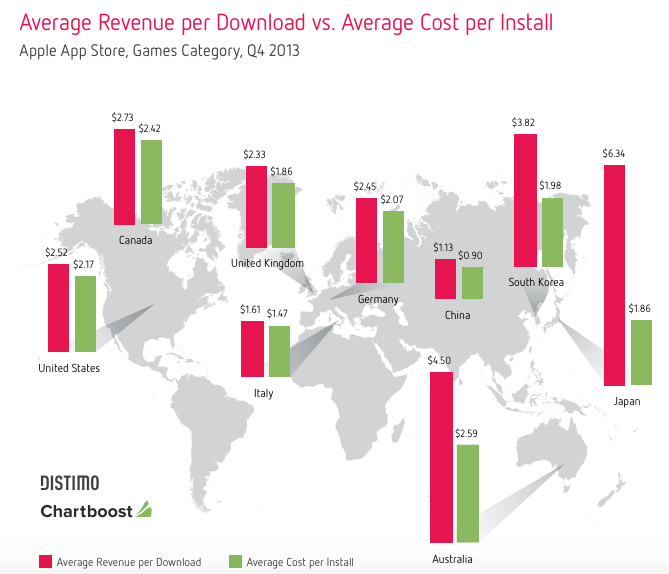 Average Revenue per Download versus Average Cost per install

And the market is huge. Japan has surpassed the United States in terms of spending on mobile games, according to data from Newzoo, with a staggering $5.4 billion in revenues. And it’s growing. By 2016, mobile games in Japan are projected to form an $8 billion market.

As a result, competitive mobile game developers need to have a presence in Japan. If you want your app to be a global player, it’s an essential market.

But, as is always the case with localization, you need some cultural know-how, too. In this post, we’ll show you how to make a splash in the Japanese market.

View Japan as a unique market—not just another Asian country

English-speaking game developers tend to think of Asia as a single entity. But Asia’s a big place, and the Japanese market is very different from other big Asian markets, such as China and South Korea. It has a unique gaming culture, a different language, and a distinctive app ecosystem. Just to give one example: Japan is the only market in the world where mobile browser gaming is very popular.

To do well in Japan, you need to treat it as an independent market.

Localize your game, or go home

English proficiency in Japan is not very high, and the market is exceptionally competitive. Translating your game into Japanese is crucial.

Fortunately, the ROI for Japanese localization is strong. For example, Distimo found that the Japanese translation for Supercell’s game Boom Beach boosted downloads in Japan by a factor of seventeen, and quadrupled revenue. 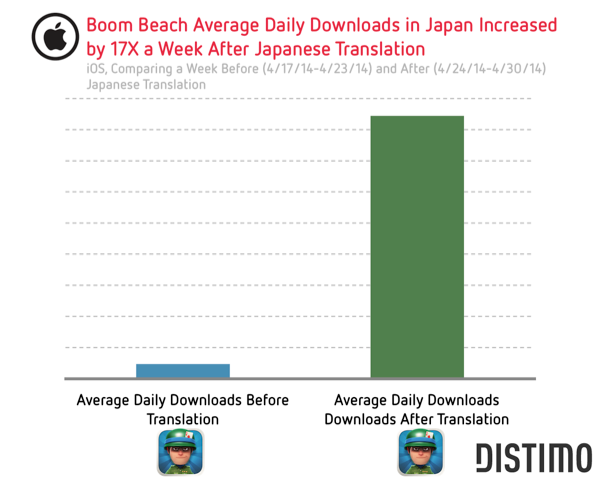 Translating into Japanese is tricky

Translation into Japanese is worth the investment. But it’s not easy. Japanese is very different from English—and its distinctive writing system can bring a new set of challenges for developers.

Follow these three tips, though, and you’ll be on your way to translation success:

1. Japanese characters can alter your UI

Japanese text is more compact than English text. When a phrase is translated into Japanese, it typically gets a lot shorter. That can leave a lot of extra space in dialogue box, and create other strange UI effects. Make sure to test-drive your Japanese version before releasing it to the world.

2. Wrap your strings to fit the distinctive grammatical structure of Japanese

Japanese puts the verb at the end of the sentence (Subject-Object-Verb) instead of the middle, as in English (Subject-Verb-Object). Developers need to wrap in-game strings in order to accommodate that grammatical structure.

The Japanese language and culture place considerable emphasis on social hierarchy and social groupings. As a result, fine points of tone, wording, and context matter a lot in the translation process. More so than in most languages, professional Japanese translators will have a lot of questions about the exact meanings of phrases, so that they can pick the right wording. To get a great translation, make sure to budget time to give thorough responses to your translators’ questions.

Looking for more guidance about localizing a mobile game? Check out our free beginner’s guide to mobile game localization.

Adjust your visuals to Japanese styles

Culture is about a lot more than language. And localization is about more than just translating words. It’s about adapting an app to an entirely new culture. Visual items that work well in one market may falter in another, or even cause offense.

In Japan, gamers have an especially low tolerance for design errors. They also have a distinctive set of cultural preferences. In an interview with Global Post, David Ng, CEO of the Singapore-based gaming company Gumi Asia, shared his experiences of localizing a game to the Japanese market.

When Gumi Asia took the game Puzzle Trooper to Japan, they ended up giving a major character, Hulk Hogan, a new manga look. “When we started doing testing in Asia, we realized that they don’t really like the western art that much. Then we tested with some more Japanese-looking art, and the response was really good,” said Ng.

When they have concerns, questions, complaints, or compliments, Japanese gamers will want to be use their native language. According to Sensor Tower, over 95% of reviews in Japanese app stores are written in Japanese, while fewer than 4% are in English.

So, after translating your game into Japanese, don’t forget to offer localized user support as well, such as an FAQ that’s adapted and translated to the Japanese market.

Apple’s App Store and Google Play are the biggest markets in the world. But the messaging app Line is also an effective distributing platform—especially in Japan, where it has 54 million users.

“LINE Revenant Gate,” by Playart Inc., and “LINE Football League Manager,” by Hanbitsoft Inc., are games that have done well through that platform. For more information about partnering with Line, check out this link.

The mobile game market in Japan is crowded and competitive. How can you get your name out there?

One tactic is to advertise on mobile. That’s the recommendation of Serkan Toto, CEO and founder of the Tokyo-based Kantan Game. As Serkan points out, advertising has been slow to adapt to the smartphone age. That’s particularly true in Japan, where, Serkan says, smartphone advertising has lagged behind the American market.

As a result, working with a mobile game advertising partner like Inmobile or Applift might give you an extra leg up in the Japanese market.

Have any questions? Want to share any experiences you’ve had localizing a mobile game to the Japanese market? Let us know in the comments!

We’re also working on a whitepaper about how mobile games succeed in the Chinese, Korean, and Japanese markets. We’ll be publishing it soon. In the mean time, you can stay tuned by subscribing to our blog.

And if you would love to localize your game, but you’re unsure where to start, our beginner’s guide to mobile game localizations offers a comprehensive introduction to taking apps abroad. You can download the guide, for free, here.